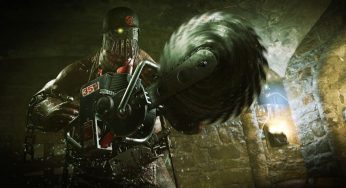 Rebellion just released a new six-minute trailer showing off Zombie Army 4: Dead War ahead of its Feb. 4, 2020 release date on PlayStation 4, Xbox One, and PC.

The video shows off the third-person shooter’s campaign mode, which takes place in an alternate history where Adolf Hitler summoned Nazi zombies. Set in 1946, Dead War features much larger levels than the three previous entries, and locations include Venetian canals, a former zoo, and an active volcano. Like previous titles, Zombie Army 4: Dead War will support four-player cooperative play, so players don’t have to face off against the undead alone.

A spin-off of the Sniper Elite series, Zombie Army 4: Dead War‘s 101 trailer shows that players can deliver brutal slow-motion kill shots, including ones that hit the undead creatures’ testicles. Players will also be able to line up chain quick-fire headshots thanks to a lock-on system and use melee executions to restore health. Since players are vastly outnumbered in the main game and its horde mode, they’ll have to use their wit to survive the zombie onslaught. One way of doing this is by using in-game traps, such as exploding trigger decoys, electric floors, and tripwires.

To encourage replayability, Zombie Army 4: Dead War features 100 ranks to unlock that each deliver new perks. Players are constantly earning weapon upgrades and new skills that will help keep the combat feel fresh. With item modifiers, cosmetics, and special melee attacks, there are plenty of ways to make your character stand out from the crowd while mowing down the undead.