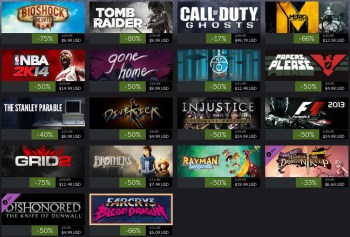 There’s a sizable chunk of most player’s Steam libraries that has never even been installed.

We’re all guilty of the “pile of shame,” that is, a pile of games that we start playing, but then get distracted by the next shiny toy before actually completing them, but according to an Ars Technica Steam database dig, there’s a sizable chunk of games in most players libraries that have never even been played. According to the research, approximately 36% of all games registered in players libraries have never been played.

17% of games are played for less than one hour, and 24% are played for between one and ten hours. To be fair, the biggest offender on the “owned and never played” list is Half-Life 2: Lost Coast which is more of a tech demo than a game, and is included free with every purchase of Half-Life 2. Of the 12 million players who own Lost Coast, only 2 million have bothered to boot it up.

In fact, the highest non-Valve game on the list is The Elder Scrolls V: Skyrim, in which 300,000 of it’s 5.7 million owners have never played it.

Ars Technica used a random sample of the approximately 172 million publicly accessible Steam profile pages to generate this information, scraping data from up to 90,000 profiles per day for “about two months”.

Some of the other information it gathered tells us stuff that we already should know – DoTA 2 and Team Fortress 2 are the most-played games on Steam by a considerable margin, and that Call of Duty players spend a lot more time in the game’s multiplayer mode than its singleplayer mode.

It makes for a very interesting read, that’s for sure, and the site has put together all sorts of cool statistics.