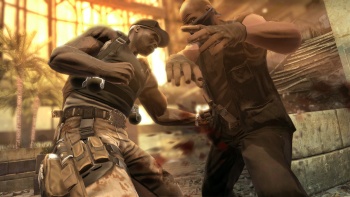 Fans of games in which rap moguls cause millions of dollars in collateral damage while trying to recover stolen crystal skulls, get excited. 50 Cent knows you want more. He wants more too.

If you’ve played through 50 Cent: Blood on the Sand, you’ll know that it’s a bit hard to imagine where a sequel could go. After all, 50 Cent had pretty much killed every single person in the world by the end of the game. There weren’t any more crystal skulls to get back, any more helicopters to blow up, any more Hummers to jump across bridges.

And yet, if you want it, Fiddy is willing to give it. “I’m hoping we’ll be able to do it,” the rap mogul told MTV News. “With the success of this actual project, we’ll try to do it again.” Hopefully he says “we” and “do it again,” he means the same team from Swordfish Studios that made the first two games – they flopped with Bulletproof, but genuinely seemed to hit their stride with Blood on the Sand.

“[Fans] said it’s a good video game,” 50 said. “They enjoyed it. I had the opportunity to play with some people online. That was exciting and another way to reach people that are aware of me.”

Meanwhile, Mr. Curtis Jackson’s other game-related project, a Saints Row movie, seems to be facing some obstacles. “I was trying to option the rights,” he said. Discouraging word there: “was.” I’m no more a fan of game-to-movie adaptations, but a 50 Cent-produced Saints Row flick seems like a good match. Apparently, the price of the project got too high even for 50, who said that “the more we talk about it, the more expensive it will get.”