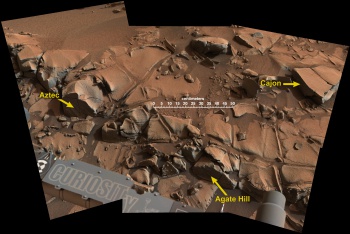 The Curiosity Rover not only continues to find evidence of long-lasting Martian lakes, but NASA has found puzzling structures hinting at additional volcanic activity as well.

The more we look at Mars, the more we find to suggest it wasn’t so different from the Earth at one time. NASA’s Curiosity Rover has already been stumbling across all kinds of evidence that water existed in the Gale Crater fairly recently. Now NASA has not only found evidence that huge, long-lasting lakes once existed above-ground, it’s uncovered strange new land structures likely formed by volcanic activity.

Let’s start with the water first. Current theories originally suggested that while water existed on Mars, it was rare, and only existed briefly during certain conditions. But as the Curiosity Rover continues its 5 kilometer journey up Mouth Sharp (situated within Gale Crater), we’re getting a very different picture. Layers of sediments along the mountain, alternating between lake, river, and wind deposits, suggest it was exposed to repeated fillings and evaporations over tens of millions of years. If the data is accurate, it suggests that long-lasting bodies of water existed across Mars instead of key locations.

“The great thing about a lake that occurs repeatedly, over and over, is that each time it comes back it is another experiment to tell you how the environment works,” Curiosity Project scientist John Grotzinger explained. “As Curiosity climbs higher on Mount Sharp, we will have a series of experiments to show patterns in how the atmosphere and the water and the sediments interact. We may see how the chemistry changed in the lakes over time. This is a hypothesis supported by what we have observed so far, providing a framework for testing in the coming year.” 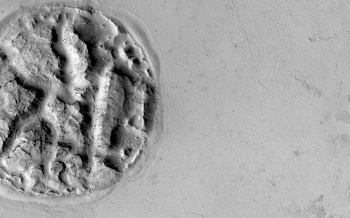 But that’s not all NASA has uncovered. The Mars Reconnaissance Orbiter spotted a strange landform last week that looks like a 2 kilometer wide pie. While the Rover can’t get in for a closer look, the current belief is that lava pushed up beneath while the heat melted any ice lingering above it.

In other words, we’re finding more and more evidence to suggest that Mars is more similar to Earth than we’d ever realized. This will be hugely significant not only to NASA, but any organization planning to colonize the red planet in the future.

Source: NASA, via The Washington Post
NASA, via Space