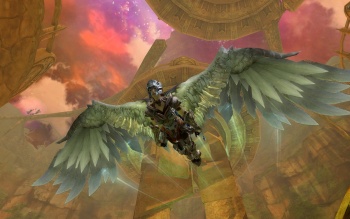 NCsoft must have been running a secret lottery for certain players of Aion that logged in this week to find themselves trillions richer.

The economies in MMORPGs are fragile, delicate entities that must be balanced properly lest they spiral out of control and end up completely destroying a game’s fun factor. You certainly don’t want a massive influx of in-game currency to just appear out of thin air, as was the recent case with NCsoft’s Aion. A few players logged in to the Azphel server on January 4 to find that they were trillionaires, courtesy of a bug.

To be exact, the players were given nearly 35 trillion Kinah (Aion‘s currency). I don’t play Aion (I’m waiting for a free trial) so I’m not exactly sure how the game works, but it looks like the money was erroneously awarded to players for siege warfare via some kind of glitch. According to Massively, Azphel’s auction house went haywire, with item prices skyrocketing as if they had wings of their own.

NCsoft’s solution to the problem was the dreaded server rollback, through which everything is reverted to an earlier state. This means if you spent the day of the glitch whistling a tune and happily leveling on your side of the world as the evil trillionaires were destroying your server, you’ve got to do all that leveling over again. Maybe you collected a really awesome set of wings or a pretty top hat. Well, that stuff is gone now.

As awesome as it would be to log in to a game and find myself rich beyond belief, an in-game economy is so important that I personally would probably have returned at least 33 trillion Kinah if his happened to me. The other trillion would be my reward, and I’d buy enough wings or whatever to last me a lifetime. NCsoft later said it found additional bugs that had a “direct impact on the stability of the Azphel economy,” but didn’t specify what these were. This just goes to show you, if a bug affects one player in a MMORPG, it affects them all.