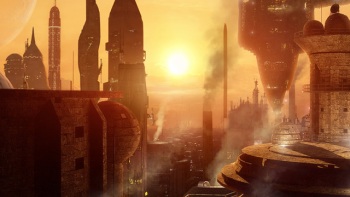 The mysterious Alien Noire is a fan-made Prey 2 website whose primary purpose appears to be to tell Human Head and Bethesda to quit screwing around.

Alien Noire popped up in early February and all eyes immediately turned to Prey 2, thanks to the internet super-sleuths who noticed words like Prey 2, Bethesda Softworks and Human Head Studios in the page source. More Prey-related evidence surfaced over the following weeks, yet Bethesda denied that it was at all involved with the site, saying it didn’t know what it was or who was doing it. The plot, as they say, thickened.

The big secret was finally revealed today as the countdown hit zero, and it turns out the whole thing is a fan site, with images, videos and other information collected from various Prey 2 sources across the internet. The screens released over the course of the past week are stills from video footage or “interpretations” of the game world based on past descriptions, as is the image of the planet Exodus that appeared in the Alien Noire subscription window.

The countdown was successful in attracting attention, drawing in 50,000 hits in the first 48 hours, and the site does offer some interesting Prey 2 information, particularly the timeline of the game’s development to this point. But even though it’s no great surprise that the site isn’t official, I can’t help but wonder if all the buildup won’t actually work against it; Bethesda denial notwithstanding, doggedly determined Prey fans were probably hoping for a little more than a fancy petition site. And yes, of course there is a petition.

“Tell Bethesda and Human Head to put aside whatever reasons caused the delay and make this a franchise and game series people will play for years to come!” it says. “Shotgun blast aliens in the face! Drop kick citizens off balconies! Toss credits at green exotic dancers! Help Tommy save Earth from destruction! Help yourself by signing your name and making your voice heard! You’re going to make this all possible.”