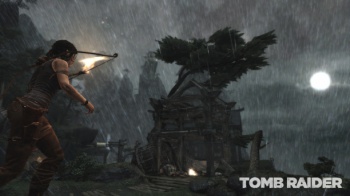 It’s so darn difficult to keep a secret these days, moans Square Enix.

Amazon Italy inadvertently revealed a next generation Tomb Raider Definitive Edition to the world, when it listed the title as a January 24th PS4 release. It’s also headed for another console, presumably Xbox One, but Amazon Italy didn’t give a date for that release. The pages were rapidly taken down, but not quickly enough, as the internet went nuts. Square Enix has since confirmed that this is the real deal, and hinted at a more official reveal to come during an early December event.

“It’s so hard to keep a secret these days!” moans Square Enix, possibly with tongue in cheek. It doesn’t have any details yet, but recommends people keep an eye “on any major gaming events happening in early December.” This may mean the VGX Awards, and Tomb Raider‘s up for several this year: Best PlayStation Game, Best Xbox Game, Best Action Adventure, and Game of the Year.

If Amazon Italy’s to be believed, then this Definitive Edition will contain all the game’s DLC, with possible pre-order bonuses as well.