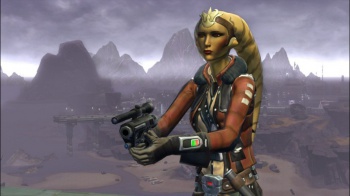 Even though everybody knows that The Old Republic cost a lot of money to make, most folks probably didn’t think it was that expensive.

In spite of some of its troubles at launch, it’s safe to say that Star Wars: The Old Republic has been a pretty rousing success so far. That’s certainly good news for Electronic Arts, since this game is reportedly the most expensive the company’s ever developed and produced. But how much did the game cost to make? One analyst is claiming that the company’s shelled out at somewhere around $500 million.

Speaking to MarketWatch in a profile piece about Electronic Arts CEO John Riccitiello, Doug Creutz of Cowen & Co explained that EA took a substantial risk with The Old Republic:

“I think it’s safe to say that the total all-in investment in ‘Star Wars’ is probably approaching half a billion dollars. EA has minimized its risks as much as it can on this bet, but it’s still a risky bet. To the extent that any one game defines his tenure, it’s going to be how Star Wars performs.”

Of course, EA is keeping mum about how much money it actually spent, so there’s no hard data to support this theory. Still, it wouldn’t be all that surprising if it turned out to be true: If you’re going to make a game that will possibly unseat World of Warcraft, you better go big or go home.