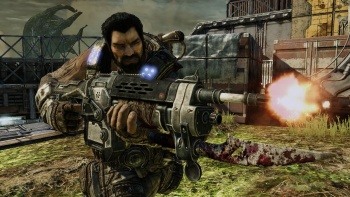 A lack of big releases is getting the blame for a lackluster summer for videogame sales.

Arvind Bhatia, an analyst with Sterne Agee, thinks that July could be one of the worst months that the videogame industry has seen in a long time, with August not looking a whole lot better. September, on the other hand, should be a significant improvement, thanks in no small part to Gears of War 3.

Bhatia is basing his predictions on a lack of big release in August, and the fact that EA has changed the release date of the new Madden game – which apparently accounts for a quarter of all game sales in August – from the middle of the month, to the end. However, these sales will rollover into the next month, which – when combined with the sales of the eagerly anticipated Gears of War 3, tipped to be one of the biggest releases of the year – should see September bounce right back.

We’re going to have to wait a few months to see if Bhatia is right in his predictions, but nothing he’s saying sounds particularly crazy or far-fetched. Madden NFL 12 comes out for pretty much every platform you care to mention – except PC – on August 30th. Gears of War 3 comes out for the Xbox 360 on September 20th.