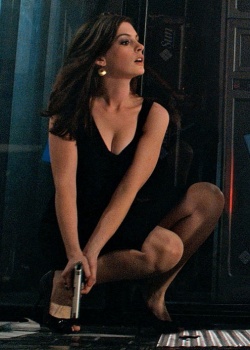 The Love and Other Drugs star beat a bevy of actresses for the role opposite Christian Bale’s Batman.

Christopher Nolan has finally cast the villains for The Dark Knight Rises, the third film in his Batman trilogy. Warner Bros. released an announcement confirming the casting of Anne Hathaway as Selina Kyle, and further specifying that the already-cast Tom Hardy will be playing Bane.

Deadline quotes the studio’s official announcement, which curiously omits a very specific word: “Warner Bros. Pictures announced today that Anne Hathaway has been cast as Selina Kyle in Christopher Nolan’s The Dark Knight Rises. She will be starring alongside Christian Bale, who returns in the title role of Bruce Wayne/Batman.” Bale is credited with his dual role, but there’s no mention of Catwoman anywhere in the release. It’s a little nit-picky, to be sure, but if they went to the trouble to mention Batman and Bruce Wayne, mentioning Selina Kyle without Catwoman seems significant.

According to Deadline, the release goes on to quote director Christopher Nolan, who gushes, “I am thrilled to have the opportunity to work with Anne Hathaway, who will be a fantastic addition to our ensemble as we complete our story.” Nolan continues to discuss the other revelation in today’s announcement, saying “I am delighted to be working with Tom again and excited to watch him bring to life our new interpretation of one of Batman’s most formidable enemies.” Bane is best known for breaking Batman’s back in Batman #497, but it’s improbable for Nolan to “complete [his] story” with a paraplegic Dark Knight. Paralyzing the man in a movie called The Dark Knight Rises seems cruel.

We’ll find out either way when The Dark Knight Rises comes out on July 20, 2012.