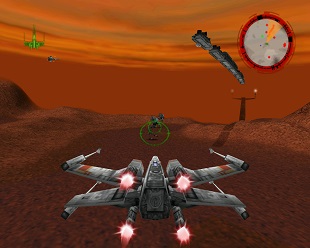 Disney is officially not messing around with classic Star Wars games anymore.

The Star Wars video game dam hath broken, and GOG is the simple mountain town down in the valley that will witness the chaos.

We received a bundle of new Star Wars games earlier this week — including Galactic Battlegrounds and X-Wing vs. TIE Fighter — and now another Star Wars supply drop has landed via the mythical powers of digital distribution.

…followed by another three titles on Monday, January 27th…

Jedi Knight: Dark Forces II is near the top of my list, but what really gets my midi-chlorians going? Rogue Squadron. It defined my Nintendo 64 experience (alongside GoldenEye and Perfect Dark), so playing with a joystick on PC will be a welcome shot of nostalgia.

This latest wave of LucasArts titles brings GOG’s total up to 18 — non-Star Wars titles included — and “GOG will release more Lucasfilm titles throughout 2015.” More to come, young padawans…more to come.

Yes, Women in Dragon Age Could Use Longswords