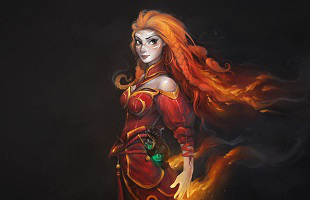 Windranger looks like she’s on loan from the Pixar Brave team.

Igor Artyomenko, known as Haryarti on Deviant Art, has several Disney-inspired illustrations up on his artist page. The subjects? Some of your favorite Dota 2 heroes, transformed into characters worthy of any Walt Disney animated epic.

My Disney comparisons for Crystal, Lina, Drow, and Windranger? Crystal is straight out of Frozen, I think, while Windranger would be right at home in Brave. Lina and the Drow Ranger are a bit tougher to place, but I could see the latter playing a role in Snow White. (Maybe as The Huntswoman?) Lina almost has a desert quality to her, but you can place her in your Disney flick pick down in the comments.

And to round out the Dota 2 mini-gallery? Igor also has a “speed paint” of Pudge — not quite a princess, but rad nonetheless. And be sure to check out the rest of Igor’s portfolio over on DA.