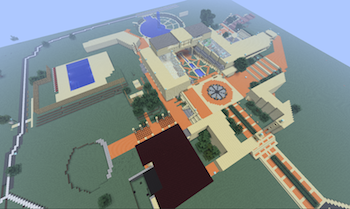 When their school flooded, students met for class on a virtual campus.

Back in September, Mojang announced Block by Block, a program to use Minecraft in schools. While it’s been teaching kids everything from urban planning to computer programming, it was used in a whole new setting this week when it helped Australian Bond University to hold classes despite its campus being flooded.

Inspired by Block by Block, Professor Jeffrey Brand started The Minecraft Uni Project with the goal of expanding classroom education into the blocky game. “On day one this semester, I introduced my students to the world,” Brand told Polygon. I asked them to do three things on the welcome sign under the Arch Building: 1) Build Bond, 2) Make Books, 3) Play Nice.” In two weeks, the students had recreated their campus, even including a Nether Portal in the basement labeled “The Effects of Video Game Violence”.

When Tropical Cyclone Oswald flooded Bond University’s campus, Brand decided to leverage their new virtual one instead. To hold class, Brand used Minecraft in combination with a remote slideshow. Brand handed out XP to reward participation. “[W]e were just there in another IM Chat environment except that we had a proximal model of our real-world room and the affordances of gestures and the occasional brandishing of TNT,” Brand said.

“The discussion was not as fluid as it is in the classroom due to the IM chat,” said student Steven Kuiken. “I found that following the content and lecture slides was an easy task to manage whilst in our online lab. Pulling up articles was easy.” After almost two hours of lecture, Brand’s class was set free, where they promptly set off fireworks.