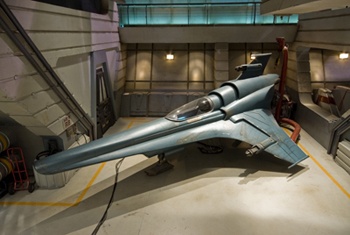 Ever dreamt of battling Cylon Raiders in deep space? Well, if you have some spare cash, you can make that dream just a little bit more real.

Now that Battlestar Galactica is finished, there are plenty of props hanging around doing nothing but collecting dust and NBC/Universal have decided to auction them off. The variety of items on offer is simply staggering, ranging from medals and rank insignia, to rocket launchers and flight helmets. You can even buy currency and letters, should such things tickle your fancy.

The main attraction however, are the two full sized fighters. A Raptor or a Mark VII Viper – which, in my humble opinion, is much cooler – could be yours. Both ships have fully functioning interiors, with light-up panels and monitors. Propworx, the company running the auction, says that they think they’re going to have a Cylon ship available as well.

But if you’re planning on investing is some BSG memorabilia, you’d better have deep pockets. A 500 cubit note will set you back $77 and a flight suit will cost in the region of $2000. The top prizes, the ships, were previously auctioned on eBay and although bids for both ships reached around $21,000, neither met the reserve price.

The auction takes place in Pasadena on May 8-10.