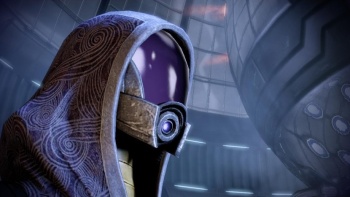 BioWare is apparently still wrestling with the single biggest question of the Mass Effect franchise: what does Tali actually look like?

Same-sex relationships notwithstanding, Tali’Zorah is probably the most interesting romance option BioWare has ever come up with. She lives in a hermetically-sealed suit, complete with opaque helmet, and nobody knows what she looks like, presumably not even Shepard when he invited her up to his groovy bachelor pad in space to do the horizontal mambo. He clearly wasn’t grossed out when she finally lifted the lid, but what he actually saw remains a mystery, even, it would seem, for the good folks who actually made the game.

“We changed Tali – that was tough because people were very passionate about her. A lot of people want to have her face revealed and obviously people are going to be pissed off either way,” Mass Effect 3 Executive Producer Casey Hudson told CVG (via Kotaku).

It’s quite possible that Hudson is just dangling the long-awaited Tali reveal to make the fanboys dance, but I don’t find it all that terribly hard to believe that BioWare is having a hard time figuring out how to handle the situation. She’s clearly an alien, but she’s also very much a “fan favorite,” if you know what I mean. I think it’d be hilarious if she turned out to be a cross between a Predator and Dr. Zoidberg but realistically, I just don’t see it happening. My advice to BioWare? Keep the helmet on and the mystery intact.