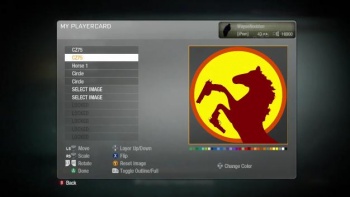 Xbox Live’s chief enforcer is not going to put up with swastika use in Call of Duty: Black Ops no matter what you say.

Players of Call of Duty: Black Ops have the ability to create their own emblems for use during play, a feature that has the potential for offensive use. Director of Xbox Live policy and enforcement Stephen Toulouse has taken to his blog to make sure that players know they can’t use the swastika as an emblem despite its historical significance unrelated to the Nazi party. Doing so will earn an Xbox Live ban, no ifs, ands, or buts about it.

He writes that even if you point out that the swastika goes back thousands of years and has been used as a symbol in various religions such as Buddhism, it’s not acceptable for use on Xbox Live. When asked if it could be used freely, he replied: “No, of course you can’t, we’ll ban you.”

Toulouse feels that most people will look at the swastika and think about Nazis and the genocide the party committed in World War II. Is he wrong? He points out that its context cannot be explained through Xbox Live, so the swastika is therefore considered offensive on the service even if you personally don’t think it is.

“The Xbox Live profile and in game content you create is accessible by everyone,” he writes. “You do not have the context inside of it to explain your long winded contrarian view that your pithy text that violates the Terms of Use or Code of Conduct is actually intended to change people’s minds about a commonly held understanding.”

“It’s not political correctness, it’s fundamental respect,” Toulouse adds. “If you think the swastika symbol should be re-evaluated by societies all over the Earth, I think that’s great. Your Xbox Live profile or in game logo, which doesn’t have the context to explain your goal, is not the right place to do that.”

This applies to any other similar symbol as well. I’m somewhat baffled that Toulouse had to come out with such a strong statement on the issue. Swastikas have been cut completely from certain versions of Black Ops, so it shouldn’t come as a surprise to anyone that the world is still sensitive about the symbol. I mean, it was sort of attached to one of the worst events in the planet’s history. If you really think you should be able to use it, just calm down and switch to a horse with gun hands instead. Isn’t that way better anyway?