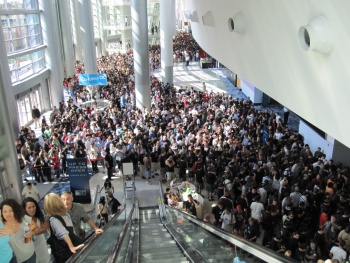 Is Blizzard worried that its unannounced “next-gen” MMOG will cannibalize its WoW subscription base? No, not so much – COO Paul Sams thinks that the game will feel different enough that people won’t feel the need to choose one over the other.

At BlizzCon ’09, I had the chance to ask WoW boss J. Allen Brack about whether or not Blizzard was worried that the mysterious “next-gen” MMOG it’s keeping safely under wraps would cannibalize the WoW playerbase once launched. Brack thought for a moment, and then opted to go on to the next question for the time being lest he say something he might not have been authorized to. Speaking with Wired’s Tracey John, though, Blizzard’s Chief Operations Officer Paul Sams was slightly more forthcoming – yes, there were concerns, but he didn’t think it would be a gamebreaking issue:

“I think the (new MMO) is going to be significantly differentiated enough,” Sams said. “Such that, you’re not going to feel like they’re one and the same resulting in that you have to pick or choose,” he said.

“If the bad thing that happens to us is that they leave WoW and go to this other thing of Blizzard’s, then we’ll work through that pain,” he added.

He does have a point – in the end, their money is still going to the same place, so it doesn’t make much of a difference. Still, it’s interesting to see the claim that the new MMOG will be significantly different. We could have all guessed that it wasn’t going to be swords-and-sorcery, but does a simple genre change equal “significantly different”? One might almost wonder if the new MMOG is Blizzard’s answer to EVE – a massive, single-shard game.

Sams also touched on some other subjects – would WoW ever go free-to-play, the monetization of Battle.net, the company’s views toward petitions, and the responsibilities it held to stockholders as well as to gamers. In an attempt to quash persistent rumors that there would be a subscription to play StarCraft II online, Sams was adamant: “(I)f you buy a copy of StarCraft II, you will be in a position to play the game on Battle.net with no additional cost.”

Would World of Warcraft ever eliminate the subscription fee? Sams didn’t want to say absolutely never, but it wasn’t in the plans for the foreseeable future: “The fact is that the WoW experience is exceptionally expensive for us,” with hundreds of people doing nothing more than physical maintenance of servers, and thousands more acting as in-game help – to say nothing of actual development costs. Still, there wasn’t anything completely ruling the idea out for the future.

Blizzard has seen its share of petitions lately – first for the Diablo III art style, then for StarCraft II‘s LAN – and while Sams said that they wouldn’t necessarily change anything, the company did take notice of them. Even so, he cautioned, while it would be easy to get angry about individual changes without seeing the larger picture or how they fit into the full final game, he asked gamers to trust the company, pointing to their track record:

So I will say trust us and be patient. Ask yourselves how many times we have tried something big, where we changed the way you were expecting it, and it wasn’t the right decision. How many times has it happened where we completely screwed it up? I would argue that’s a pretty small number of times. There’s always a reason why. We don’t make decisions… we don’t take them lightly. We take them very seriously. We know in advance if we should change the art style somewhat here and there, that people are going to be frustrated by it. But if there’s a good reason, then we say, “Let’s make that move.” Ultimately, when everyone gets the clarity on why we really did it, they’ll go, “Oh, I see.” That’s the way we look at it.

Of course, as John pointed out, Blizzard was a publicly traded company – didn’t it have an obligation to its stockholders to make as much money as possible? Sams agreed: Yes, Blizzard was part of a public company, and it had to pay its employees as well as fulfill obligations to stockholders, but he didn’t see fulfilling obligations to stockholders and gamers alike as necessarily conflicting ideals, since “our shareholders are not only the people that own stock in our company. There’s another whole contingent of people that are also shareholders that don’t hold that piece of paper, and that’s our players.” In the end, since the players are the ones who vote with their pocketbook and pay the shareholders, they’re the crucial market: “So it’s in the shareholders’ best interest and Blizzard’s best interest to focus on those gamers. The true shareholders. And when they hold the keys and we give them what they want, they take care of all the rest.”

Check out the full interview with Sams at Wired