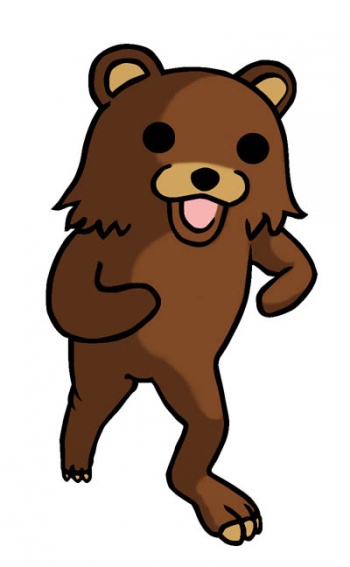 Police are warning parents to look out for the new pedophile mascot: internet meme Pedobear.

Pedobear is an image of a cartoon bear that forum users often use to humorously express the creepiness of another person’s online behavior. It’s become a well-known meme, so well known in fact that California police have issued a safety warning to the public about the “innocent menace” that Pedobear represents.

A public safety information bulletin issued by the San Luis Obispo County Police indicates that they’re somewhat aware that Pedobear is a meme, but they still seem to be taking it pretty seriously. They say that Pedobear’s “cute face and non-threatening appearance negate the truth of his sinister, much darker side.”

The bulletin goes on to read: “One of the things that makes Pedobear popular is the controversy surrounding his licentious love of little girls. Pedobear is and should be associated with the internet and pedophiles/sexually-preferential offenders who reportedly use him to communicate their interests in young children to each other.”

It then details an occurrence that saw a man dressed as Pedobear at the San Diego Comic Con banned from the event, simply for handing out candy and being dressed as the meme. Due to photos police saw of children photographed with Pedobear, the police say: “Disguised as innocence, this underground community that would make victims of our children teasingly reaches out into the light of day.”

Despite police thinking that Pedobear’s presence, say as a decal on a car windshield, “may be an indicator of the presence of individuals who have a predilection to sexually inappropriate, or even assaultive behavior,” it’s really just a silly joke. Warning people about what Pedobear is associated with is one thing, but police have chalked the meme up to a mascot for pedophiles, which it isn’t. Someone with Pedobear on their car is probably at worst a forum troll, and though forum trolls are annoying – really, really annoying – they aren’t going to harm your child. As far as internet memes go, I can think of a lot worse, including one that involves a cup and two friends.

Nehrim: A New Twist On an Old RPG Finally Sees the Light