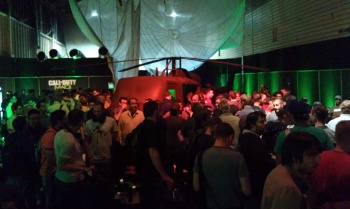 There’s no denying that Call of Duty is among the most popular entertainment properties in the history of mankind, so it’s about time that Activision gave Blizzcon and Quakecon a run for their money with its own fan event. This weekend, Call of Duty XP 2011 kicks off at the Stages at Playa Vista in “isn’t it supposed to be sunny?” Los Angeles. Thursday night, the teams from Activision, Infinity Ward, and Sledgehammer games gave the press a sneak peek at what’s in store.

Activision CEO Eric Hirshberg kicked things off, explaining, “This weekend is all about our fans.” Attendees will get a first chance to see the fan-made (and Activision-funded) sequel to the sequel to Find Makarov, attend panels on a number of topics including Elite and Zombies, play multiplayer sessions of Modern Warfare 3 and Black Ops, and even engage in a little paintball in life-size recreations of two popular Call of Duty maps, The Scrapyard and The Pit.

Oh, and anyone who attends also gets a free copy of Call of Duty: Modern Warfare 3, Hardened Edition, which includes a year’s subscription to the new Elite service.

While this is clearly a fan-focused event, Activision’s also mindful of giving something back to the men and women whose exploits inspired the game, so the publisher will be donating the money from this weekend’s ticket sales to the Call of Duty Endowment, an organization that helps veterans find jobs. This weekend will also host a number of Pros vs Joes matches where top NBA stars will compete online with servicemen and women on active duty around the world; additional donations will be made to the endowment on behalf of the winners.

After giving us a look at some of the new trailers for the game and Find Makarov: Operation Kingfish, Hirshberg invited Robert Bowling of Infinity Ward and Michael Condrey of Sledgehammer Games to the stage to talk about the new features in Modern Warfare 3. I’m happy to say the focus is back on gunplay. While the Last Stands and Nukes and other streak bonuses still play a role, more kills will have to be earned with your own weapons this time around. It’s a change that will definitely level the playing field for most players and give newcomers a chance to compete on more even terms.

The second big change is that Kill Streak rewards now focus on points rather than kills. The previous system, introduced in Call of Duty 4: Modern Warfare, was really only optimized for deathmatch modes, so players who focused more on capturing objectives and assisting their teammates were often left out of the game’s streak rewards. This time around, that type of play will also contribute to unlocking these new abilities.

Players will be able to customize their own streak packages, according to their specific role. The Assault streaks are largely the same as they are in the current game, so players who love their Ospreys and assault drones will feel right at home here. Support players will be able to earn benefits like SAM turrets and RC recon drones. By far, my favorite streak bonuses are reserved for the Specialist group. Here, each streak earned unlocks a new Perk and if you can earn eight kills without dying, you unlock all of the perks for use at once. It sounds insanely powerful, but getting eight kills without dying should be fairly rare for most players and it’s something that deserves a substantial reward.

New weapon proficiency options also allow players to further customize their Modern Warfare 3 experience. During play, players essentially level up the weapon they’re using, which opens the opportunity to upgrade it with a range of benefits. A player might, for example, add another attachment point, or reduce sway or recoil. 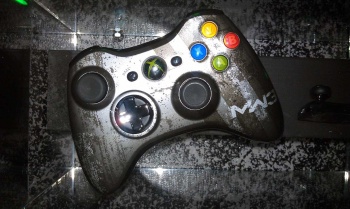 The team also revealed two new modes last night. The first, Kill Confirmed, requires players to claim dog tags from defeated enemies in order to claim points for the kill. In essence, a player will have to run over the top of any enemy they’ve taken out in order to take credit for the kill. The trick is that teammates of the dead soldier can deny that confirmation by acquiring the dog tags first. It creates an interesting dynamic where players treat the bodies of other soldiers as objectives. This not only increases the danger for players who try to retrieve tags, because the player’s enemies know where he’s going, but also means that claiming credit for taking out large groups of enemies is going to be much more difficult as the surviving members can pick up dog tags during the course of the firefight.

Team Defender is inspired by a similar sort of concept. It’s basically a version of Capture the Flag but there’s only one flag. Whoever gets it first scores points for his or her team and then it’s up to members of the opposing team to track that person down and take the flag for themselves. So as with Kill Confirmed, taking enemies out is only half the story; players will still have to go and get the flag from their defeated enemies.

After talking about the game, the presenters moved on to discuss the new Elite service. I’ve already covered the details of this service, which is as much about helping players improve their game as it is about tracking an unbelievable number of stats. Tonight the focus was on the new $49.99 per year Premium subscription. Premium subscribers will get all the DLC for the year and, better still, will get it on a monthly schedule rather than the current seasonal schedule. In other words, premium members will not only get new content first, but will also get it more often. Premium subscribers will also be able to level up their clans, compete in daily events and access expert strategy and analysis videos from top Call of Duty players.

We also heard the first real details about Elite TV, the new episodic series for premium subscribers. Developed by Will Arnett, Jason Bateman, Ridley Scott, and Todd Scott, the series will feature a few different programs. In “Friday Night Fights,” real life rivals will be pitted against each other. One episode might see firemen vs. policemen, or Yankees fans versus Red Sox fans, or John Boehner versus Nancy Pelosi. There’s also “NoobTube,” a series where Arnett and Bateman deliver smacktalk over user-submitted gameplay videos.

To close out the media presentation, Hirshberg revealed the new “Battleworn” Xbox 360 console. The new silver console and the two gamepads that come with it are distressed to look like they’ve been through a war. While it’s a neat gimmick, the bigger news, for me at least, was that the console will feature a new 320GB hard drive and a wireless Bluetooth headset. Oh, and a copy of Modern Warfare 3. Pre-orders are available now.

This will be the seventh Call of Duty game released in as many years, making it the Madden of the first-person shooter genre. But it’s hard to argue with 30 million players who are willing to follow Activision and its development studios as they refine and sharpen the series. We’ll be on hand all throughout this weekend, checking in on panels, trying out new games, and seeing what other surprises Activision has in store.