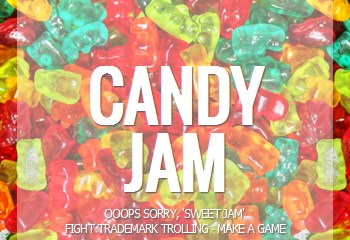 “Candy Jam” is a two-week game jam being held to protest King’s recent trademarking of the word “candy.”

You have no doubt heard by now that King, the maker of the mega-hit Candy Crush Saga, has somehow managed to successfully trademark the word “candy” and is now dropping the hammer on other mobile gamer makers who have used it in their titles. This, rather predictably, has not gone over especially well with gamers, but it seems that at least a few indie developers aren’t too happy with the situation either.

In response, indie game makers Cariboo and uuav have put together “Candy Jam,” which gives interested developers until February 3 to “make a game involving candies.” That’s pretty much it for the rules, although entrants are encouraged to “consider using the word ‘candy’ several times, also ‘scroll,’ ‘memory,’ ‘saga’ and ‘apple’ might give bonus points.”

As for the point of the whole thing, that too is pretty straightforward. “Because trademarking common names is ridiculous and because it gives us an occasion to make another game jam,” the Candy Jam website explains.

“While there seems to be some kind of consensus about the need for a company to protect blatant ripoffs of game names and/or game aspects, I think that the fact that it was done with so little finesse is what gathered people in [opposition],” Candy Jam co-founder Laurent Raymond said. “That plus probably the irony of a company talking about intellectual property while being an nth rehash of Bejeweled.”

Laurent said he hasn’t heard from King about the Candy Jam, and that he doesn’t expect that the studio will care about it one way or the other. And while he thinks that the jam is a worthwhile effort, he doesn’t hold out much hope that it will change anything in the long run.

“I like that it shows that game developers are ready to mock them a little and that ethics matters a lot. They could have handled the issue so much differently,” he said. “[But] I have little ambition about the whole thing. We’re going to enjoy coding silly things, mock them, change a few minds and then everyone will forget the event as soon as it ends. I wish it would mean something but this is not the first time that it’s happened, and most of the time it’s handled by just letting the rage pass. We’ll just add fun to that rage for once.”

King recently stated in its defense that it’s not looking to steal everyone’s candy, just those who take advantage of the vagaries of the App Store. The icon for the ridiculously-named Candy Casino Slots – Jewel Craze Connect: Big Blast Mania Land, for instance, has only the words “Candy Slots” on its App Store icon, while the title itself appears designed solely to boost search rankings, lending some credence to King’s claim.

Candy Jam is live now and runs until February 3. To get in on the action, head over to TheCandyJam.com.

UPDATE: In his original email, Candy Jam founder Laurent Raymond said, “I think that the fact that it was done with so little finesse is what gathered people in [opposition]. That plus probably the irony of a company talking about copyrights while being an nth rehash of Bejeweled.” He has since contacted us to note that he was in fact referring to intellectual property.

“I obviously believe in being right and the fact I’m representing the Candy Jam makes [the misstatement] even more unfortunate,” Raymond said. “Hopefully it doesn’t change my message because I’m trying to make a point about ethics and not any particular technical flaw in the law.”

We have updated the statement accordingly.