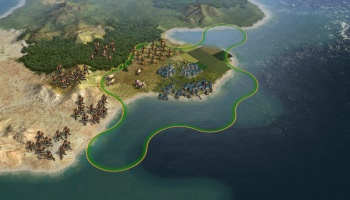 Fans of the Civilization series will be pleasantly surprised with the lack of “unit stacks of doom” and the addition of city-states.

Civilization is one of the longest running game series ever, with its first iteration released by Sid Meier in 1991. I played the crap out of each Civilization so I was excited to hear that Firaxis was busy designing Civ V to be ready for this fall. I was equally happy to attend 2K Games presentation of the game at GDC 2010 and I have to say that I like the changes that I saw in store for the newest Civilization. The alterations to combat, as well as changes to the resource, diplomacy and border systems will add many strategic wrinkles to Civ‘s tried and true gameplay. Gone are features like Civ 4‘s religions, but Firaxis is hoping that the addition of NPC city-states and integrated mod support, as well as other unannounced features, will bring Civ V to the next level.

Under development for the last 2.5 years, we were treated to an in-game demo of how a typical game would begin as well as the taking over of an enemy capital, in this case Washington D.C. First off, the game looks absolutely beautiful. “We’ve got a more organic landscape that looks like it grows naturally with flowing rivers and sweeping hills,” said producer Dennis Shirk. “The art was influenced by a heavy gameplay change, which many avid Civ fans will notice first, the change from square tiles to hex tiles. Hexes allow us to make much more organic flowing lines. We have a lot less of the right angle mountain ranges and rivers.”

Another big change is the combat system. Units are no longer destroyed if they lose a battle, which means that civs can spend much more resources on maintaining their armies as opposed to cranking out new units. The combat that we saw took place completely outside of a city, and positioning and terrain are much more important. “In the past, combat revolved around stacks [of units], which our fans affectionately call ‘stacks of doom,'” Shirk said. “We wanted to pull combat out of the cities, and make every unit important.” No two units can occupy the same tile, even friendly ones, so positioning on the battlefield becomes very important. Ranged units, like archers, are used to soften up the front lines from up to two hexes away, but they are vulnerable to attacks from melee units. The result is an emphasis on battlefield tactics instead of most Civ games which favored the civ that was able to crank out the most units.

The resource system supports that concept. In Civ3 and 4, once your civilization gained access to Iron, each of your cities could pump out swordsmen and there was no limit to how many you could make. In CivV, gaining access to one source of Iron allows you to make one swordsman and that’s it. You can’t make another swordsman unit unless that one died or you gained access to another Iron source. 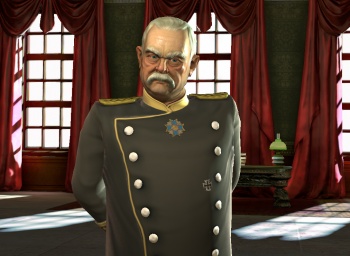 As with each Civ sequel, the diplomacy system received an overhaul. “Leaders in Civ V are bigger than life, they pull you into the scene like never before and speak their own language, Shirk said. “You might meet Napoleon on the battlefield, or Gandhi on a cliff overlooking the sea.” The AI has more at its disposal and will be able to sense units on its borders or that you are expanding too quickly.

A new addition is city-states. “City-states are small NPCs that are scattered throughout the world. They’re not trying to win the game, they never grow beyond a single city. But they make stuff happen in the world,” Shirk said. For example, Budapest was a city-state in the demo and by talking to them, you had the option of helping them out against barbarians with gold or units. Doing so raises your friendship level which means that they might gift you with units or aid in scientific research. “Different city-states grant different things,” Shirk said. A more militaristic city-state might ask you to attack a neighbor or a weaker state might be attacked and ask you to defend them. Of course, there’s always the option to simply take them over and add the city to your civ.

The lead designer of Civilization V is Jon Shafer, who made his name as a prominent mod maker for Civ games. It’s no surprise then that Civ V will boast the most extensive modding tools ever available. Firaxis realized though that not many casual Civ fans know that such a vibrant mod community exists, so they are adding a way to browse for mods directly in-game. The mod browser will allow users to scan for mods by popularity with a built-in rating system, as well as give Firaxis the ability to feature mods on an ongoing schedule. Modders will be able to solicit comments and questions by linking to their fan pages on CivFanatics through an ingame web browser.

Overall, there are enough new features in Civ V to draw new fans to the series who may have only played Revolution or Colonization and enough of that classic Civ gameplay to make even hardcore fans excited for an update.