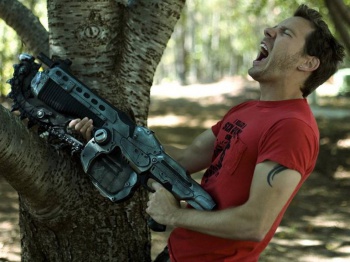 Dude Huge claims that it is impossible for used games and game rentals to co-exist in this world of massive marketing and production budgets.

Microsoft’s decision to redefine the concept of “game ownership” and Sony’s decision to ridicule that decision had many people praising the PS4 developer. Cliff “CliffyB” Bleszinski, former bigwig at Epic Games and creator of the Gears of War franchise, was not one of them. “You cannot have game and marketing budgets this high while also having used and rental games existing,” he said via Twitter. “The numbers do NOT work people.”

Dude Huge also thinks that Sony has its own used game solution up its sleeve and is just playing on the internet outrage for free PR. “You’re all being played!” he warns us. Rumors that Sony’s own machine would block used game sales in some way surfaced in the lead up to the PS4’s reveal.

Bleszinkski went on to explain his stance, saying that games have gotten so big that there is just no way the next generation can survive if the used game and game rental markets keep taking a cut. “The visual fidelity and feature sets we expect from games now come with sky high costs,” he says, “Assassins Creed games are made by thousands of devs.”

The former dev also warns us that the day-one $60 disc-based model is crumbling. “Newsflash. This is why you’re seeing free to play and microtransactions everywhere.”

Pretty inflammatory statements, but then again, Cliffy B is not known for holding his tongue, having spoken out in favor of unpopular business strategies in the past.

Nonetheless, you can’t argue with the success of man’s games, and he is in no sense of the word a “bad dev.” He does actually know what he’s talking about, so maybe he is just saying the things we all don’t want to hear, but know to be true?

But then again, maybe he should just can it, and have a look at Nintendo’s stance on used games: make games that are so good that people will want to keep them forever.