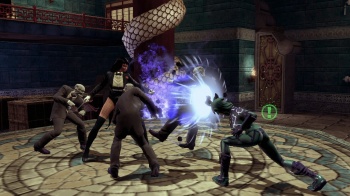 SOE thinks that DC Universe Online is ready to go and set a release date for sooner than you might think.

I’ve had a pretty great time playing the beta of DC Universe Online, but I had no idea that the full release of the game would be ready so soon. Sony Online Entertainment announced today that you will be able to play beside Superman and the Joker on January, 11 2011 (that’s only 3 weeks away in case you are calendar-impaired.) DCUO costs $49.99 for your PC while it will set you back $59.99 if you want to play on your PS3. The first month is free, but will cost you $15/month after that. That is, if you don’t want to drop the $199 on a lifetime subscription. Is the game ready? Chris Cao, Creative Director at SOE, seems to think so and he’s got some great stuff in store for the apocalyptic event planned for the end of the beta test.

“If I had to offer one piece of advice to a new player, it’s this: get ready for something new. We aren’t a traditional MMO. We aren’t a single-player action game,” Chris Cao said. “We’re a super-powered game you can play with your friends for months on end. That’s not hype. That’s DCUO.”

The game was originally pushed back from its November 2010 release date by John Smedley, President of SOE, because he believed that DCUO needed more polish. SOE took that time to gather more information from the beta test, such as the fact that Superman was the most popular mentor and that players split between heroes and villains roughly 60-40, with a greater concentration of villains on the PvP server.

All of the names and characters currently in the beta will be wiped clean, but SOE plans to offer the players something for their time. “[Comic book writer] Jim Lee and our friends at DC are going to join us in a live, end-of-beta event where players will fight alongside and against the iconics as Brainiac’s menace yet looms,” Cao said. “Players will be able to experience what would’ve happened had they followed in the footsteps of the cinematic and battled each other instead of fighting to save Earth. It will be an epic end and thank you for beta.”

PC users are used to paying a fee for an ongoing MMO experience, but it will be interesting to see how PS3 owners will respond to both the persistence of DCUO and shelling out the dough for it. Cao shrugged it off as a non-issue. “A little over a decade ago, people questioned subscription fees on a PC. They’d never played an MMO before and they weren’t sure why they’d pay monthly to play it. Then they stepped into those first worlds, lived online, and came to realize that the experience was worth the expense,” he said. “The same thing is going to happen on the PS3.”

DCUO is certainly an experiment on a number of levels, and I will be watching the launch closely to see how it is received. SOE promises to support the game over the next few years, and there is definitely a lot of source material to draw from in the DC universe. Let’s hope it makes it all online.