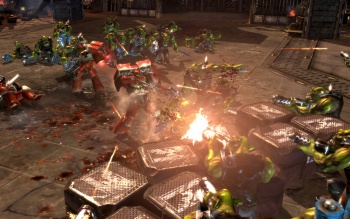 PC gaming will be around as long as people are using PCs, the Dawn of War developer says, but piracy is not going away.

PC gaming is like the Rasputin of the games industry – it gets declared dead every two minutes, but it keeps trudging along like its entrails aren’t hanging out of its stomach. Recent times have seen one of the strongest assaults on the platform in the form of rampant piracy, but, if we’re listening to what Relic Entertainment producer Jeff Lydell has to say, the PC will keep going strong. “PC gaming has been ‘dead’ since 1994 and it continues to ‘die’ every year,” Lydell said to VideoGamer. “But that’s obviously not true, because there are people playing PC games.”

Lydell pointed out that it’s easy to mistakenly take the fact that PC gaming is changing as a sign that it’s dying. “It’s just that we’re seeing changes in the types of PC games [people are] playing,” he explained. “A lot of the things that the PC had that were exclusive to it, like online experiences, are starting to come over to consoles – so it’s less of a hold-out for that kind of social interaction.”

Lydell was adamant that none of the current generation of consoles, or even future generations would be able to render PC gaming obsolete, saying that PC gaming will “die the day we stop having PCs! Right now, we all want to have PCs.” A more nebulous threat, then, is the possibility of a future when PCs themselves are no longer standard. “Maybe in the future when we’re using integrated devices that aren’t quite PCs, we’ll see games on those instead.”

Addressing the more immediate threat of piracy, Lydell admitted that “it’s certainly a threat to triple A gaming,” and did serious damage to PC game developers by making them “reluctant to invest large amounts of money in a just-PC product, unless there’s some form of guarantee.”

Piracy is an unavoidable fact of the business now, and Lydell suggested that developers and publishers could only counter its effects by accepting them. “Piracy is not going away,” Lydell remarked. “As an industry, piracy is something we have to work around, not something to try and eliminate – because that’s a losing fight.”