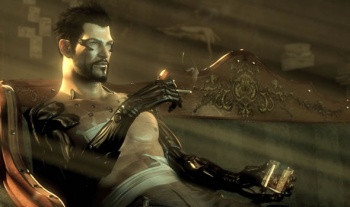 Upper Heng Sha, the streets of Montreal, India; you won’t find these places in Deus Ex: Human Revolution. At least, not anymore.

Speaking to industry publication EDGE, Eidos Montreal art director Jonathan Jacques-Belletête and lead game designer Frank Lapikas spilled the French Canadian equivalent of beans on the wealth of content cut from the final version of the game. If you’re a fan, you may want to surf away to something more pleasant, lest your rage overwhelm you.

“There were definitely supposed to be some streets to Montreal. There were outdoor locations set in one of the most famous neighbourhoods of Montreal, called Plateau. It’s got very specific architecture, called tri-plexes, with twirling exterior staircases made of this old metal,” Jacques-Belletête said.

“It’s very specific to Montreal, and we’d drawn concept art of how these streets would look in 20 or 30 years from now. We even tried them in-game. Walking around them felt quite special – that architecture had never been in a game before, and never realised alongside a vision of 2027. It was really cool.”

“We had planned for a lot more city hubs,” adds Lapikas. “Montreal was supposed to be one. Upper Heng Sha was actually built, but it was never finished.”

“At the beginning of the project we even planned to go to India. But as we constructed the city hubs, and understood the amount of work it took, we had to pare it down.”

Continuing, the pair claims that the amount of furniture and interior design nuances the firm designed “could fill an Ikea catalogue.”

Before fans have a chance to purse their collective lips and burst into petulant wails, the duo clarifies that these cuts were necessary to make Deus Ex: Human Revolution the stunningly detailed game you’re likely enjoying at this very moment.

Since Edge already took the comment-bait route by asking readers whether they might have preferred more locales to explore, over the hyper-detailed stomping grounds that made the final cut, I’m just going to make that decision for you guys.