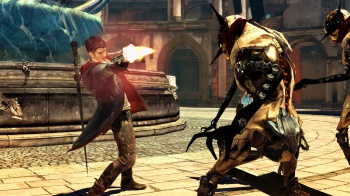 Working out DmC‘s kinks on PC may take some time.

If popular forum chatter is to be believed, there is hardly a single person looking forward to DmC: Devil May Cry, currently slated to launch on 360 and PS3 in January 2013. Granted, you can’t always believe everything you read in forums, as Capcom is well on its way to releasing a PC port for Dante’s upcoming adventure. Capcom has assigned adaptation duties to QLOC, a Polish studio that specializes in QA and porting duties for big publishers. Although the port appears to be in good hands, don’t expect it right away; technical difficulties will prevent the PC DmC from launching contemporaneously with its console brethren.

“I can’t give you a day and date,” says Alex Jones, a producer at Capcom. “Because it’s being developed out of house by a different developer from Ninja Theory there are logistical things involved. But the plan is to get it out shortly after the ship date for the console version.” QLOC has worked on a number of Capcom titles before, including Street Fighter 4 Arcade Edition and Street Fighter x Tekken, and earned glowing praise from Capcom for its work. Even if the port is not instantaneous, Capcom maintains that it will maintain the console DmC‘s quality. However, there has been no word yet on whether the PC port will offer any features to distinguish itself, such as enhanced framerate or higher graphical settings.

Jones is very clear about one thing, however: Virgil, Dante’s brother, will not be a playable character this time around. “I don’t want to be coy about that and have people think they’re getting one thing when they’re getting another,” he explains. Regardless of platform, it seems that Dante will have to tackle his new adventure alone. That shouldn’t be a problem for any experienced demon hunter, though.