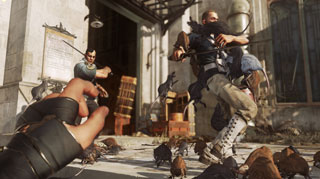 Bethesda has announced that Dishonored 2 is complete, and detailed how much PC you’ll need to run it.

Dishonored is set to release next week, and today Bethesda announced that the upcoming sequel has gone gold. Alongside that announcement, the company also announced when pre-loading of the game will begin, and what the PC system requirements will be.

For PC players, Bethesda has also detailed the minimum and required specifications you’ll need for Dishonored 2. To hit the recommendations looks like it will take at least a GTX 1060 or AMD RX480. Here’s the full list:

PC gamers will also be glad to hear that the PC version of Dishonored 2 will ship with plenty of extra options, including multiple display quality options, resolution options, and FOV settings. For Nvidia users, you can expect hardware-specific options for TXAA and more. You can find the whole list of PC settings in this post over on Bethesda.net.

Dishonored 2 will launch on November 11 for PC, PS4, and Xbox One. Those who pre-order will get access to the game one day early, although we certainly don’t recommend pre-ordering, no matter what the game.