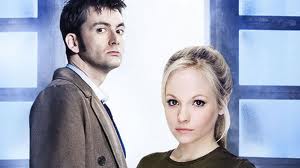 The Hollywood Reporter is confirming rumors that former Doctor Who star David Tennant is engaged to his one-time Doctor Who co-star, Georgia Moffett. The pair met while filming the season 4 episode “The Doctor’s Daughter,” in which Moffett played Jenny, the titular daughter.

This won’t be the first time lord in Moffett’s family; her father is Peter Davison, the Fifth Doctor. Her mother, Sandra Dickinson, is no small sci-fi star herself, having played Trillian in the 1981 miniseries The Hitchhiker’s Guide to the Galaxy.

The Hollywood Reporter claims the wedding “is scheduled for New Year 2012,” but does not specify a source. Take the wedding date with a grain of salt. I’ll just use my salty tears.