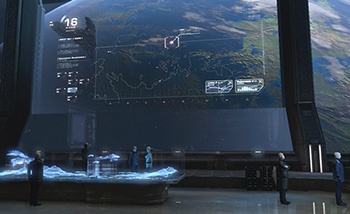 What’s next for EVE Online creator CCP Games? According to CCP CEO Hilmar Veigar Petursson, the firm is hard at work on an online action title codenamed “Dust 514.”

Speaking at the Gamescom conference in Germany, Petursson also offered attendees a trailer and two images from Dust (see right). Neither the in-game media nor CCP’s trailer shed much light on what the game is like, despite the publisher’s noticably generic assertion that the game features “first-person shooter and RTS-style gameplay.”

More impressive however, is CCP’s promise that Dust 514 will “interact directly” with EVE Online. The publisher offers no word on how this cross-game functionality might work nor how it would be accomplished technologically, though presumably more details will emerge from CCP’s annual Fanfest convention in Reykjavik, Iceland this October.

Though Dust 514 has been in development for more than three years, no official price point or release date has yet been established.