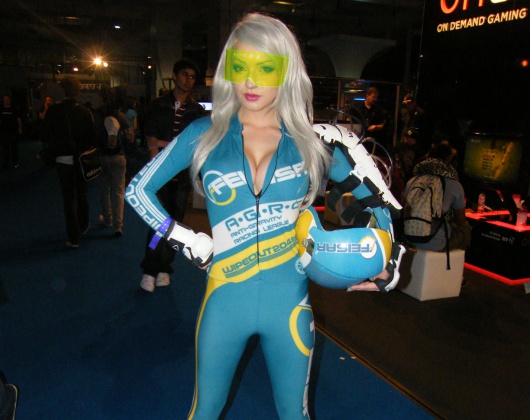 The Eurogamer Expo has implemented a formal ban on booth babes after Virgin Gaming went a little too far.

The Eurogamer Expo went down this past weekend in the U.K. and by all reports it was a smooth and solid success, with one minor bump in the road: booth babes. According to Eurogamer Network Managing Director Rupert Loman, the event has always had an “informal guideline” discouraging exhibitors from bringing booth babes, but this year three companies brought them anyway. The Virgin Gaming girls were of particular concern, because they each had a QR code printed on their backsides.

“Exhibitors need to bring staff to the show, but they should be interesting, cool and exciting and knowledgeable (developers and publisher staff) rather than pretty girls in revealing outfits just for the sake of it. We want the show to be friendly, and all 50,000 attendees to feel comfortable. At this year’s show three companies showed up with booth babes. Two in particular we thought were dressed inappropriately. As a short term measure we told them to move into the 18+ zone, and we asked some of them to put on leggings as well,” Loman wrote on the Eurogamer forums.

“Although it was only a small number of booth babes, our regret is that we didn’t go further on the first day and just say ‘this isn’t right’ and ask them to change their clothes – or not attend. Instead, with the huge pressures of putting on such a large show and everything that comes with it, we let it go. And that’s what has prompted this debate – and we’re sorry it happened,” he continued. “For future shows we will be issuing formal guidelines: Booth babes are Not OK.”

Is this really an issue? Because I have to say I find it a little odd that while the Eurogamer Expo makes such a big show of banning booth babes from its floor, it has no problem with scantily-clad “cosplayers,” or posting pictures of them on its Facebook page. Is the woman in the photo above a booth babe or a cosplayer? And if you can’t tell, then how do we determine where to draw the line – and why?

I also find myself wondering what would happen if Virgin showed up next year with a flock of muscular, oiled-up studmuffins in Speedos. Here’s hoping somebody tries it.