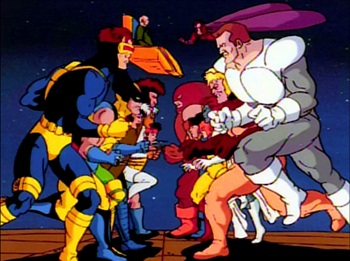 In a move sure to please the anti-mutant movement, a U.S. federal court has ruled that the X-Men (or at least their action figures) do not count as humans.

If you grew up during the 90s, nothing conjures up memories of getting up early and crowding the TV in your pajamas quite like the X-Men. More than a few Millennials read the comics, watched the TV show, and owned action figures from the freakishly extensive toy line. While the X-Men would like nothing better than to be accepted as brethren by the humans they protect, the United States Court of International Trade finally ruled, after years of debate, that the X-Men do not count as humans, at least as far as importing toys is concerned.

The debate entailed a series of court cases going back over ten years. Toy Biz, the company producing X-Men toys, imported the iconic mutant action figures from China, and noticed that the X-Men drew higher tariffs than other toys. As it turns out, tariffs relating to dolls (“representing only human beings and parts and accessories thereof”) were higher than those for nonhuman toys. Toy Biz took the case to court and argued that the X-Men (and by extension, Spider-Man, the Fantastic Four, and other Marvel heroes) toys represented meta-humans, mutants, aliens, and other inhuman entities. The cases went back and forth for a few years, and had trouble arriving at a universal answer: While the court at one point decided that the X-Men counted as nonhumans, it maintained that their adversary the Silver Samurai was subject to the “doll” tariffs. Marvel fans are sure to scratch their heads at this one, since the Silver Samurai is as much a mutant as the X-Men themselves.

While the case could be seen as a victory for Toy Biz, it’s a bit of a hollow one. The company became a division of Mattel a few years ago, and Hasbro now possesses the license for most Marvel toys until 2017. Furthermore, the distinction between dolls and other toys was part of a now-defunct tariff system; the cost to import the two is now the same. If toy tariffs undergo further revision, this ruling could prove useful. Otherwise, chalk this one up as a victory for the Brotherhood of Mutants. Maybe those divisive humans weren’t worth protecting, anyway.

Source: Law and the Multiverse