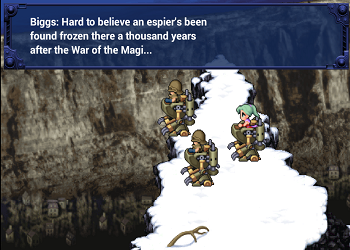 I will admit to being a bit biased against the mobile remake of Final Fantasy VI at this point. I was hopeful back when it was first announced but my optimism came to a pretty swift end when screenshots for the game began to surface. The backgrounds and environments looked pretty enough, but the sprites just looked weird and out of place. As if that weren’t the final straw, it would now appear that Square Enix hasn’t been paying the closest attention to the game’s script.

In case you didn’t know, the Android version of Final Fantasy VI launched yesterday. One enterprising player, in turn, has taken to Imgur to post screenshots and impressions. While some screens exhibit a few genuinely interesting additions from the remake, one image reveals that Square Enix allowed a typo to slip into the game’s dialogue. Granted, typos do happen sometimes, even in games. That being the case, it’s arguably a bit problematic when a typo occurs in the second line of dialogue during an opening that is more than a bit famous. You’d just think that Square Enix would know how to spell “esper” at this point.

It’s a real shame too because it really does look like Square Enix made some intelligent choices in other spots. Sabin’s Blitz controls, for instance, apparently make good use of the touch controls. The game also introduces some fairly intelligent modernizations to help lessen some of the more archaic elements of the original version. I still don’t like elements of the visuals and the price ($15.99) most certainly isn’t right, but I could see reasons why some might want to give this version a try. For my part, I’m sticking to the three copies I already have.

Concept Art Shows What The BioShock Movie Could Have Been