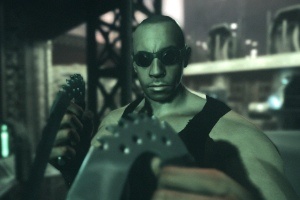 After years of hiding in the darkness, Starbreeze emerges with a new publisher in Atari and an entirely unexpected sequel as they take us on a demo of The Chronicles of Riddick: Assault on Dark Athena.

The setup for The Chronicles of Riddick: Escape from Butcher Bay could not possibly have been worse. Starbreeze’s innovative first-person action title faced a PR nightmare the likes of which is rarely seen in the videogame space. The movie from which it owes its creation, “The Chronicles of Riddick,” was blasted by critics and largely ignored by the general public, making it both a critical and commercial failure. Gamers, inherently distrusting of anything considered to be mainstream or dealing with pop culture, immediately rejected the idea of playing a game in which Hollywood strong man Vin Diesel is the protagonist. With moviegoers soured by a bum flick and gamers turning up their noses at Butcher Bay, it seemed as though the only audience Starbreeze had left was its critics.

And they loved it. Escape from Butcher Bay went on to become one of the best-reviewed titles of 2004, thanks in part to its brilliant pacing, impeccable level design and immersive environments. Unfortunately, with great press does not come great sales as Escape from Butcher Bay struggled to get out the gate, gradually picking up the pace in the following months. Starbreeze had crafted something truly special and knew it. All it needed was an opportunity to spring its creation on the masses once more. Displeased with Microsoft’s faulty backwards compatibility on the Xbox 360 and with dreams of a sequel, Starbreeze got back to work on the world of Riddick.

The Chronicles of Riddick: Assault on Dark Athena is a package of two titles, Escape from Butcher Bay and the all-new namesake, Assault on Dark Athena. With Escape from Butcher Bay, Starbreeze essentially recreated the entire game to nearly exact specifications, only utilizing the brand-new technology built for Dark Athena to vastly improve upon the visuals, gameplay mechanics and enemy intelligence. The developers have also taken plenty of fan feedback into consideration, altering some areas of the game to be a bit more user-friendly, such as the notoriously complicated mines sequence in the opening hours.

While a remake of the original Chronicles of Riddick would be good enough on its own, the Assault on Dark Athena campaign, originally intended to be a brief addition to the remake, has ballooned into a full, ten hour single-player campaign, effectively acting as a sequel to Escape from Butcher Bay. The two games can be played in any order and act as stand-alone titles.

In the brief, 30 minute demo of Assault on Dark Athena given to us by Starbreeze, we saw Riddick stranded on the ship Dark Athena, fighting a brand new type of enemy known as Drones. While they seemed like your run-of-the-mill space marines at first, Drones are essentially remote-controlled human soldiers, with both automatic and manual controls. When they’re being run in auto-mode, it’s much easier for the stealthy Riddick to sneak about undetected as they’re essentially robots, lacking true human perception. In manual mode, however, all of this changes as the Drones will actively hunt for Riddick, work together and use both sights and sounds to their advantage. The Drones can also come under the control of Riddick at certain points, providing a few refreshing, albeit mindless, shooter segments.

Since Chronicles of Riddick was never a shooter game, stealth and hand-to-hand combat still plays a central role in Dark Athena, with Riddick getting his hands on a new set of toys known as Ulaks. Think of them as a pair of brass knuckles with long, scythe-like hooks applied to the edges, making for some spectacularly brutal kills. It’s not all combat, however, as Starbreeze’s knack for inventive level design still appears strong, with Riddick crawling about the innards of the Dark Athena and using active Drones to make creative puzzle solving solutions.

For as long as Assault on Dark Athena has been in development, 30 minutes isn’t nearly enough time to give a thorough assessment of how the project is coming along, but what’s there so far is hugely impressive. Also on the agenda for Starbreeze is a multiplayer component which it will be showing off in due time, though the company’s track record on the matter isn’t particularly promising. What Starbreeze does is craft incredible, single-player experiences (The Darkness, for example) and is damn good at it. Its previous attempt at a creative, multiplayer experience with The Darkness fell flat and Starbreeze is looking to do something wildly different once more with Riddick. Fingers crossed for something great, but using the company’s past work as an example, not every first-person title needs multiplayer, especially if it’s simply to provide a bullet-point on the back of the box.

The Chronicles of Riddick: Assault on Dark Athena is due out early 2009 for both Xbox 360 and PlayStation 3.