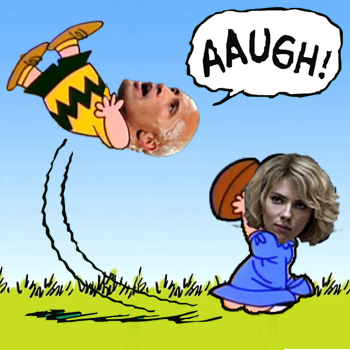 The ongoing late-2013/2014 Hollywood story of big box-office takes for female-led blockbusters has another badass babe icon to stand up with Elsa and Maleficent: Lucy. Luc Besson’s Scarlett Johansson star-vehicle had a big $15-16 million Friday, well ahead of the $11 million second-place finisher Hercules despite heavy year-long promotion and the presence of a proven action star in Dwayne “The Rock” Johnson.

The high-concept actioner, in which Johansson plays a young woman who attains godlike powers after being implanted with experimental drugs by gangsters, is now looking at projections of a potential $44 million weekend. Impressive numbers for a late-Summer entry featuring an R-rating and not based on any existing material or franchise, already leading some analysts to renew the question of whether Johansson’s “Black Widow” character should receive her own movie ahead of Marvel Studios’ Saturday SDCC panel.

Speaking of Marvel, the studio is expected to be next week’s big winner with Guardians of The Galaxy opening essentially unopposed (the real test may be how it performs against the better-known Teenage Mutant Ninja Turtles the following week.) Analysts are still considering it the biggest “risk” for the hitmaking studio since the original Iron Man, citing the mostly-unknown set of characters, unusual setting and spotty track-record of “space opera” films outside of the Star Wars franchise.

How Marvel’s Agent Carter Might Cover Decades Of History