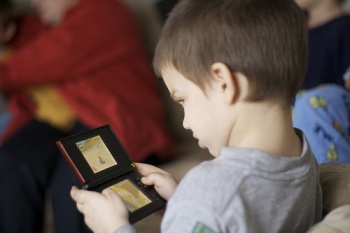 According to a staff writer at The Orange County Register, videogames were created by Satan to turn children into “drooling, glassy-eyed stooges.” And it gets worse from there.

Marla Jo Fisher refers to herself as a “Frumpy Middle-Aged Mom” on The Mom Blog. Her post from December 27th was called “Videogames Were Invented By The Devil” and it details why she doesn’t allow games to enter her house. Despite the fact that she looks and reads like the fictional columnist at the Onion, Jean Teasdale, her anti-gaming message is all too real.

“After my son plays [games] at his friends’ houses, he comes home irritable and testy for the rest of the day,” she said. “Even though his skin is normally mocha-colored, after a day spent in a darkened room with a controller in his hand, he comes home with a sickly pallor.”

Fisher goes on complaining that she sees kids playing games everywhere, “On one horrible afternoon that scarred me for life, I even saw a kid walking out of the public library playing a Nintendo DS.”

From there, she extrapolates that kids are dumb and starts rewriting history:

When do kids ever think these days? When do they ever have brains free from electronics long enough to ponder the universe? To think of things that might someday lead them to a cure for cancer?

I’m going to refrain from commenting further on this article. I leave that to you, faithful denizens.