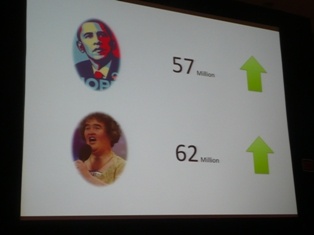 Game designers pitch their design documents to the audience and they pick the best iteration on the theme, which this year was “real life perma-death.”

Every year at GDC, independent game guru, Eric Zimmerman, runs a panel called the Game Design Challenge. The setup is simple: three designers or teams are given a theme ahead of time and they set about creating the design document for a game based on that theme. At the panel, they pitch the game to the audience, who then chooses the winner and Zimmerman bestows a gag-gift upon them and there is much rejoicing. It’s a raucous event, and all in good fun. Last year, the theme was “My First Time” having sex and the team of Heather Kelley (Kokoromi) and Erin Robinson (Wadjet Eye Games) won, even though they had only few days to prepare. This year, Zimmerman chose a somewhat more somber theme: each of the games needed to involve a death that occurs in the real world.

First up was Robinson and Kelley, back to defend their crown. Their game was called, Last Game and Testament and it’s basically a piece of software that allows you to create your will in a fun way. They were inspired by their own family history and The Last Lecture by Randy Pausch, but their game seemed a little silly. A simple interface would let a person leave specific objects to people in their will. You could then print out a barcode and attach that to the object. After you die, your family would then have a sort of scavenger hunt looking barcodes and scan them with their iPhones. This would bring up GUI that prompts your family members to guess which one of them would get the object. The member would quickly find out whether they are correct, and a short video will play, recorded before your death ostensibly, telling them why. After all of the objects were scanned, you’d see a leaderboard the person who had guessed correctly the most times would win a bonus item. Like a grandfather clock. From your dead grandfather…

Next up was Jenova Chen from That Game Company. His game was the silliest of the bunch, HeavenVille. At first it was called DeathVille, but he took a cue from Zynga panel earlier at GDC and decided to make it more pink. Basically, it’s a FaceBook game which gives you alerts when people actually die. More than that, people are given a value based on their Google page number and multiplied by the number years they are dead. So George Washington has 71 million results but he’s been dead for 211 years so he ranks higher than Micheal Jackson right now. You can “buy” people and HeavenVille then becomes a kind of stock market where you want to buy low and sell high. Chen’s presentation was definitely the most entertaining, with lots of comedy timed well with the PowerPoint slides, but I thought his game lacked any real thought behind it. What would you use the “currency” you earned for? Was it just points? Is Michael Jackson really dead?

Last year, Kim Swift was asked to drop out at the last minute by Valve, allegedly for the challenge’s sexual content. Zimmerman joked when introducing her that that was exactly why she left Valve, so that she could come back and compete in the Game Design Challenge. To her credit, before Swift pitched her game, she made it clear to apologize for backing out so late. Then she ahead and delivered Karma. This game would be diagnosed for someone who is terminally ill so that they could come to terms with their own morality. You have an energy bar and a series of locations you’d go to as your energy bar slowly decreases: office, neighborhood, apartment, hospital. Along the way, you can choose to help people, which boosts your karma. There are minigames for each activity, such as a timing game to help push a child on a swing. As your energy decreases though, you have less and less at your disposal so that eventually, the only thing you are able to do is smile. That’s the last minigame in Karma and when Swift described it in her talk, I couldn’t believe that I was actually crying. Games may not make me cry, but game pitches about death apparently hit my sentimental funny bone.

Unfortunately, the audience didn’t agree with me and Jenova Chen took home the prize: a flask of whiskey. Robinson and Kelley did not repeat and were awarded second place, and a skull from Zimmerman. Poor Kim Swift was robbed, and only got a comic book about death for placing third.

So much for gamers wanting to feel real emotion in a game. Really guys? You want another crappy Facebook game? Really?

Blizzard May License Battle.Net In The Future