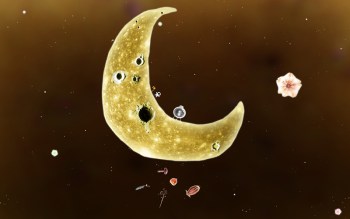 GOG has a sweet make-up deal for gamers who preordered Botanicula from their site.

The launch of the much-ballyhooed [relatively speaking] Botanicula was made doubly sweet by its inclusion in the Humble Botanicula Debut. The collection of Botanicula, Machinarium, Samorost 2, Windosill and soundtracks across the board in a pay-what-you-want package is a ridiculously good deal for gamers everywhere – unless, that is, you happen to be a gamer who had already preordered the game from GOG for $8.99. That’s $1 off the regular price, which is a deal, but compared to the Humble Bundle offer? I think it’s safe to say that some early buyers were feeling burned.

For its part, GOG says it knew nothing about the bundle until it launched and if it had, it never would have taken preorders at all. But since that horse is out of the barn, the company has decided to make the best of it by giving those who purchased the game a comparable bonus package.

Everyone who purchased Botanicula from GOG before 12:00 GMT [8 am EDT] will also get a copy of Machinarium, the full soundtrack and, courtesy of developer Amanita Design, a digital art book of Botanicula designs and character sketches. Furthermore, to set the GOG offering apart from the Humble Botanicula Debut, purchasers will also get a free copy of The Witcher: Enhanced Edition Director’s Cut.

It won’t make everybody happy – nothing ever does – but under the circumstances, it’s about as good as anyone can expect. As to how this little debacle happened in the first place, nobody seems to know [or at least they’re not saying] but I’d guess that oversight and inattention figure prominently. Copies of Machinarium and The Witcher: Enhanced Edition will be added to GOG libraries automatically on Monday, while download links to the soundtracks and art book will be provided via email. For full details, go to GOG.com.