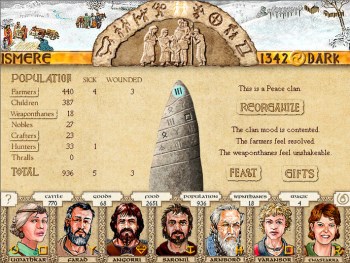 Despite its age, the fantasy kingdom management game King of Dragon Pass has held up remarkably well.

The King of Dragon Pass was originally released in 1999, but it’s aged quite well as these things go, thanks in large part to its relatively static nature. Animation and visual effects are virtually non-existent; instead, the eye candy comes by way of outstanding “hand painted” art, which in spite of its relatively low resolution and color palette is still very easy on the eyes.

In a similar vein, the gameplay, while obviously dated, remains accessible and enjoyable. As the leader of a pseudo-barbarian clan forced to resettle in the dangerous, magical Dragon Pass, you must lead your people to prosperity by guiding virtually every aspect of their lives, from recruiting farmers and soldiers to building fortifications, sending trade delegations, sacrificing to the gods, launching and defending against raids and much more. The game unfolds over many years, each divided into seasons that not only represent “turns,” but also have a meaningful impact on the game: In the Sea season, for instance, crops are being planted and farmers may refuse to report for military action, while Fire season, when the weather is fair and the crops need little attention, actually provides a boost to morale during raids.

But it’s the random events that really bring King of Dragon Pass to life. Problems of all kinds pop up, and as the man on the throne it’s your job to straighten them out. One of your weaponthanes was insulted by another clan; do you dismiss his complaints, go to war or find some other way to balance the scales? A band of fearsome warriors seeks your aid in a hunt for roaming undead; can you spare any of your meager forces? A maiden betrothed to a hothead from another clan is caught in flagrante delicto with a local scoundrel and seducer, and yes, that too becomes your mess to clean up. Even when the decisions seem easy, the choices you make can have long-term consequences, such as when a warrior from another clan recognizes your trade emissary as a brave fighter from many seasons past – or when the now-married maiden is brought before you by her very angry husband, “puffed up” with the seed of another man.

There’s an impressive depth to the fiction of King of Dragon Pass, with an entire, surprisingly meaty section devoted to the myths, history and culture of the game world, but while it does tie in with the gameplay, it’s not necessary to dig that deeply into it in order to have success. Nor does it place great demands on your time; a full game can take many hours to complete but you can play for as little or as long as you like in a session and save at any time, in any state.

Strategy games often tend to hold up better to the ravages of time than other genres, and King of Dragon Pass is no exception. It’s currently available for $5.99 on GOG in a package that includes wallpaper-style artwork and a very strong soundtrack. If you’re in the mood for some accessible gaming that challenges your brain instead of your reflexes, it’s not a bad way to spend six bucks.