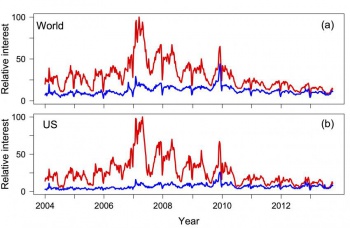 Public interest in climate change has been decreasing steadily since 2007, according to research.

Google Trends studies performed by Oxford and Princeton University researchers have revealed that people have been losing interest in the subject of climate change over the past several years. According to a report published in the journal Environmental Research Letters, worldwide search interest in the topic has been waning since 2004.

The researchers observed the Google Trends for the terms “climate change” and “global warming” in English, Chinese, and Spanish – the Internet’s three most popular languages. Google Trends databases more than 80 percent of the world’s Internet search engine activity. The 2006 release of Al Gore’s documentary, “An Inconvenient Truth,” was followed by a rise in search interest in climate change that peaked in 2007, when the IPCC’s fourth climate change report was released.

Thereafter, the researchers found that media coverage of climate change resulted in short-lived rises in public interest that ultimately had no long-term effect on global search interest, even for incidents like “climategate” that caused major controversy. The study also notes that independent polling data corroborates these results for U.S. citizens.

We’ve seen a few headlines in the world of climate change in the past couple of months. A new U.S. Government report issued in early May claimed that climate change is worse than we predicted. The 2014 IPCC report claims global warming is a threat to human security. The UN World Meteorological Organization has stated that global warming has accelerated and will go on for centuries. Does climate change still interest you, or are growing numb to having the same information repeated year after year?

Doodlebugs Without A Cause