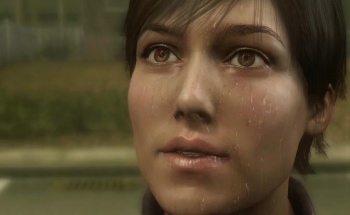 The designer of Heavy Rain resists the term “interactive movie” but that’s kind of what it is.

David Cage of Quantic Dream doesn’t think the word “game” is an accurate description of Heavy Rain, a PS3 title due out on January 28th in North America. The “game” has been under development since 2006, when it was shown at E3. Heavy Rain is a dark mystery story with mature themes that delivers handsome visuals, if the screenshots are any judge.

“Heavy Rain is about playing with a story almost in a physical sense, changing it, twisting it, discovering it, making it unique, making it yours,” Cage explained. “Using the term ‘interactive movie’ to describe Heavy Rain has been a tricky question from the beginning. It is in many ways what Heavy Rain is – a visually told story that the player can affect by his actions.”

Nobody likes interactive movies, mostly because the games that were called that in the 90s barely had any game elements at all and were really just loosely connected cut-scenes. Cage is aware of this, and is trying to distance Heavy Rain from it.

“In Heavy Rain, the player is in control second to second,” he said, “He tells the story through his actions. All this is done in a very fluid, seamless way, with no cut scenes, no big flashing sign to make decisions, and this is what makes the game really unique.”

What that means is it may not even be a “game” at all but something wholly other and transcendent.

“Heavy Rain is not a videogame anymore in my mind,” he said, “because it breaks with most of the traditional paradigms, but it’s fully interactive.”

That’s certainly an ambitious goal. If it works, it will be an achievement and we may even see a slurry of games trying to imitate the format. If it doesn’t break through the stereotype built against interactive movies though, you can chalk up another failure of a game trying to emulate film.

Maybe games are games for a reason.