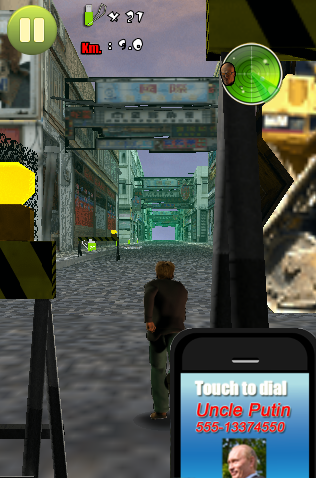 Snowden can drop a hydrogen bomb, ridding his course of obstacles, by calling “Uncle Putin” on his mobile phone.

There has always been one thing the story of NSA whistleblower Edward Snowden has needed: a Temple Run-style videogame. Enter Snowden Run 3D, a free Android and PC/Mac game based on Snowden’s flight from Johnny Law. In the game, the player collects USB sticks and laptops containing sensitive information while being chased by Special Agent Jake. If he catches you, you get thrown in Guantanamo Bay and the game ends. As it is an infinite runner with no actual way to “win” the game, it just goes to show that in the end, the government always wins.

Snowden has a single power-up at his disposal, a hydrogen bomb that can be dropped on the map, temporarily ridding his course of obstacles making his run just a little smoother. The hydrogen bomb is accessed by calling in a favor from “Uncle Putin” on the player’s cellphone.

“Due to the very limited development time dedicated to this game,” writes the developer, “There are a lot of possible improvements, especially gameplay-wise that will be made in the future through the use of updates.”

“The game does not point a finger to either the US agencies and companies involved in the data-collection scandal nor Mr. Snowden,” claims the developer, stating that it attempts to remain neutral “as far as a parody can be unbiased.” He stresses that “There is absolutely no political motivation behind this game nor am I affiliated with any government agencies or Mr. Snowden.”

Snowden Run 3D can be downloaded for free, on either PC/Mac or via Google’s android Play store.