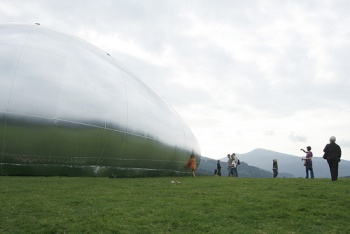 A cloak of invisibility has been a staple of fantasy literature from folklore to Harry Potter but a team of scientists has proved that such an item might become a reality.

The idea of becoming invisible is up there on every gamer’s wishlist. Whether it’s through wearing a cloak, casting a spell, putting on a magic ring, or hiding your ship with a cloaking device, you’ve probably accomplished the feat hundreds of times in games. But what if we were able to create a real Cloak of Invisibility? A team of scientists at the Karlsruhe Institute of Technology in Germany have published a paper describing how they were able to fabricate a small piece of matter which rendered objects beneath it invisible. Fabrication techniques still limit the size of the object that they can hide but the team at least proved that such an item is feasible.

The study was led by scientist named Tolga Ergin. He said that the theory behind the experiment came from an idea first proposed by the English professor, Sir John Pendry from Imperial College London.

“He proposed the theoretical design of having an object hidden under a bump and making the bump disappear,” said Dr. Ergin. “It’s like a carpet mirror. If you hide an object under it, there is a bump, so you see a distortion in the reflected image. We put the carpet cloak on top of that bump and it bends the light so that the distortions disappear. You have the impression that the mirror you’re looking at is flat.”

Previously, it was possible to drill very tiny holes into an object using a laser which would bend the light so that an object beneath it would appear invisible. But this process had a limit in that this effect only functioned when looking at the object from one direction. Ergin’s team got around this limitation and made 3D invisibility possible by using “laser writing” on a photo sensitive material.

“Wherever you put the focus spot into the material, it will harden,” said Dr. Ergin. “It’s a similar process to photography – when you develop it, whatever hasn’t been exposed to the laser will be washed away.”

Unfortunately, using this technique they were only able to make a cloak that could hide an object one micrometer (one millionth of a meter) long.

“It took us three hours to make this structure, so if you wanted to make it even one millimeter [one thousandth of a meter] in size you would have to wait a very long time,” said Dr. Ergin. “But in theory there are no limits. You could blow this up and hide a house.”

Neat stuff, even if they are in the very early stages. What would you do if you had a real invisibility cloak?