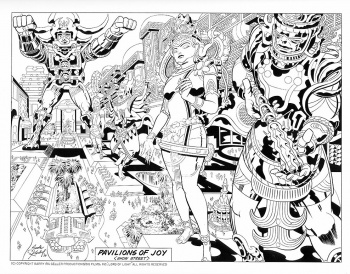 The real artwork that supported the rescue of American hostages is getting more attention than ever before.

As you might have learned from Moviebob’s review of Argo, this Oscar-contender highlights the work of a few mid-70s geek icons. Most notably, famed comic book artist and Avengers creator Jack Kirby designed the concept art that aided in the extraction of six Americans during the Iranian Hostage Crisis. Now that Argo and its Oscar nominations have popularized the event, interest in Kirby’s art and its role in the rescue has increased as well. As it turns out, prints of Kirby’s Argo art were recently highlighted on Buzzfeed, giving us a closer look at details put into a film that never happened.

Before Ben Affleck’s 2012 version, Argo started life as an adaptation of Roger Zelanzy’s popular science-fiction novel Lord of Light. Kirby’s work on the project began when he was hired by producer Barry Geller to create designs for its world and characters. Included among the images is Kirby’s depiction of “Science Fiction Land”, a proposed theme park to be constructed during post-production using the film’s elaborate set. The project was dropped when one of Geller’s staff was discovered embezzling funds, leaving the script and artwork to be picked up by the subsequent CIA rescue operation.

To be fair, some of these pictures have already been circulated online, usually in the form of thumbnails taken from Barry Geller’s Lord of Light website. At a higher resolution, these images offer a great look at how Kirby introduced Eastern aesthetics into his familiar art style. Argo‘s art actually bears a close resemblance to Kirby’s Fourth World books from the early 70s, which makes sense considering both stories depict gods wielding highly advanced machinery. It’s unclear whether Kirby realized his art was being used to aid a hostage rescue operation, but given the controversies surrounding other uses of his work, I suspect in this instance he might not have minded much.

Dreamfall Chapters Takes a Turn for the Cyberpunk