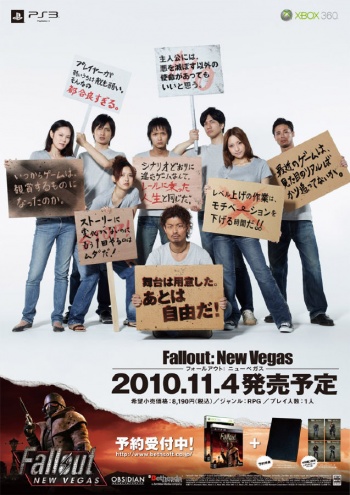 JRPGs used to be king of the roost, and in sales some of them still are, but the genre is often considered by fans and developers alike to be repetitive and somewhat stagnant. This is reflected in a recent humorous advertisement for Fallout: New Vegas in Japan, which questions why JRPGs have to be the way they sometimes are.

The ad features eight protesters holding signs questioning various typical aspects of Japanese RPGs, and boy do they look pissed. Translated by Andriasang, one sign reads: “What’s the point of playing again if there’s no change to the story.” Another angrily asks: “When did games become something that you watch?”

A third protester believes “a game where you just follow the scenario is like living life on rails,” while a fourth says “it would be nice if the main character had a mission aside from just wiping out evil.” All of these comments have direct ties to the gameplay and storyline of Final Fantasy XIII, the latest entry in one of the world’s most popular JRPG series that was released in Japan in December 2009 and everywhere else in March 2010.

The ad of course offers a solution to these woes by making sure everyone knows that Obsidian Entertainment’s Fallout: New Vegas is coming out later this year (Nov. 4 in Japan, Oct. 19 in the U.S., Oct. 22 in Europe). New Vegas is an extension of the open-world, choice-filled gameplay Fallout has always been always known for, but that was recently expanded and brought back into public consciousness with Bethesda’s Fallout 3. The message here is clear: If you’re sick of JRPGs, western RPGs that let you decide whether you want to annihilate mounds of super mutants or not are your solution.