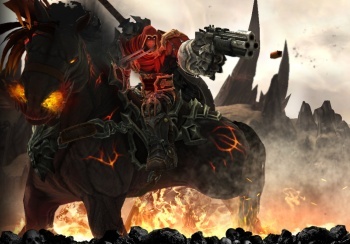 John Romero says he still thinks Quake was a great game, but what he really had in mind for it was something a lot more like the recent THQ release Darksiders.

id Software’s Quake was a technological revolution when it came out in 1996. It was also a bit of a mess, with futuristic shooter elements haphazardly mixed with dark, Gothic fantasy settings and a story so thin it made Doom look positively Shakespearean. It was hugely successful nonetheless, owing in large part to its ready “moddability” and online gameplay, but as former id designer John Romero revealed in his recent turn as guest editor of Retro Gamer magazine, it was also far from what he’d envisioned.

“The technology was constantly changing, so we couldn’t do much with the game design. It took a year for that engine to be workable,” Romero said. He wanted to spend more time working on the game but the rest of the team wasn’t interested, creating a rift that eventually led to his decision to leave the company.

“Carmack was on the fence, and American McGee and Dave Taylor were on the side of, ‘You know what? Let’s just throw Doom weapons in the game and get it done. I can’t do this any more’,” he continued. “I couldn’t believe it. How could you want to throw the engine away with a shitty game design? I was just fighting everybody’s attitude, but I thought, ‘Okay, I’m done here. This company is fractured.'”

And while Romero never got to design the Quake of his dreams, somebody eventually did. “It’s funny,” he said. “When I saw Darksiders, I was like, ‘That’s it, right there. That’s what I wanted Quake to be.'”