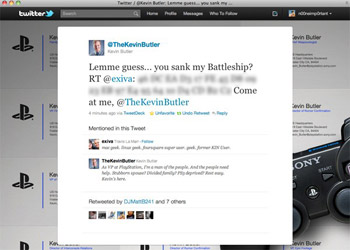 A quip about battleships has turned into an embarrassing blunder for Sony.

Sony’s spokesperson and VP of Fictional Advocacy, Kevin Butler, unwittingly helped to spread the now-infamous PS3 root key by retweeting it on Twitter. Sony is busy trying to prevent people from getting hold of the key, so not only is this slip-up embarrassing for Sony, it’s also potentially undone a lot of its hard work.

[Update: It was actually the code for the USB Jailbreak device from last year, and not the root key as previously mentioned. So, still an embarrassing slip-up for Sony, but as it has already dealt with that particular vulnerability, the code wasn’t as damaging as the root key would have been.]

Linux and Mac enthusiast Travis La Marr tweeted the code at Butler, and signed off with the meme-tastic “come at me @TheKevinButler.” Whoever manages the Kevin Butler Twitter account didn’t realize the significance of the long string of letters and numbers, and retweeted it, adding the remark, “Lemme guess … You sank my Battleship?” Clearly, someone figured out what was going on, because the tweet has since been removed, but for a short time, the code was up for everyone and anyone to see.

La Marr said that his tweet was meant to show his disdain for the way that Sony was handling the situation with the security breach, adding that he didn’t actually own a PS3. Since the release of the code in January, Sony has sued George Hotz and the hacker group Fail0verflow, and issued DMCA takedown notices to at least one site handling custom PS3 firmware. Sony was recently awarded a restraining order against Hotz, and is attempting to subpoena records from YouTube and Twitter containing the personal details of the people it holds responsible for releasing the code, and anyone who has watched any videos associated with it.