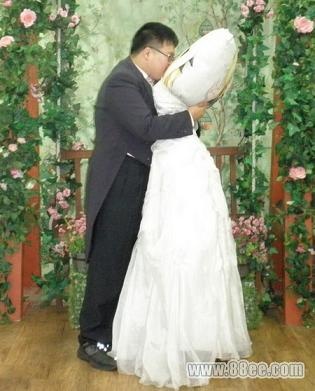 A Korean anime fan has proudly tied the knot with a pillowcase featuring the image of his favorite magical girl heroine.

Heavy Rain asked the player, “how far would you go for love?” Would you go so far as to travel to another country? Would you kill a man? Or would you just decide that your soulmate was a fictional character and marry her image printed on a cotton pillowcase?

A Korean otaku opted to go with the last option, wedding a dakimakura body pillow featuring the image of Fate Testarossa, one of the popular heroines of magical girl show Mahou Shoujo Lyrical Nanoha. Not only has this particularly dedicated fan married his favorite pillowcase, he also takes her out on dates to restaurants and to amusement parts, as chronicled on media sites.

This isn’t the first time we’ve seen die-hard otaku marry fictional characters: A Japanese man named Sal9000 married his virtual girlfriend in dating sim Love Plus back in November. While our natural inclination to these scenarios is to sit back, point and laugh (and boy, do we sit back, point and laugh), it raises some interesting philosophical questions about marrying inanimate objects.

Oh sure, it’s not a problem now as long as you’re marrying pillowcases and plastic Nintendo DS screens, but what happens when we invent realistic sexbots (other than the extinction of humanity, that is)? What happens when AI becomes sentient? Will convincing a computer to fall in love with us save us when the machines take over?

One has to wonder how long the happy groom will remain happy for – after all, judging by the popular opinion expressed in fanart and fanfiction, his new bride is a total lesbian. On the other hand, it’s not like he has to worry about a pillowcase cheating on him, unless you count what happens when he puts her in the washing machine with his other body pillows.