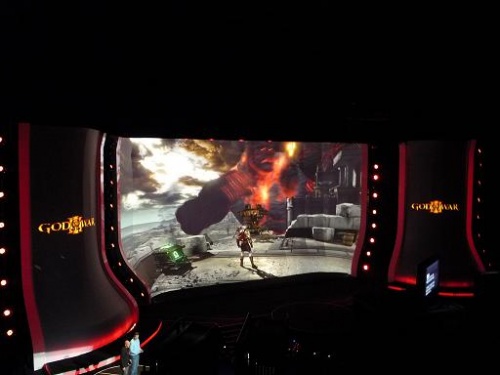 News about the PSP Go slipped late last week, but Sony apparently still has two hours‘ worth of news to share with us. Can’t wait to find out what they have to say.

11:10 – We’re starting a bit late, but Queen’s one vision is playing as we watch wonderfully bombastic video of games like Godof War, Saw, Wet, Ghostbusters, and God of War.

Jack Tretton comes on stage to make a joke about press leaks.”We won’t be outdone by anyone!” he says.Good one,Jack.

11:14 – The screen behind Jack is enormous.Huuuuuge. Practically bigger than Escapist HQ, seriously. And Jack says that only the PS3 is capable of showing live code at the resolution necessary to display on that massive screen.

11:17 – Kicking off by talking about the PS2, which remains the “perfect family console,” and will feature 100 new titles this year. And the $99 price tag sure doesn’t hurt any.

And now Jack is spitting out statistics. At this point, Microsoft trotted out The Beatles, Jack Tretton is talking about how well Sony sells in Latin America. Just sayin’.

11:19 – inFamous is just one of 35 exclusive titles coming to PS3 this year. Ooooo, I think we’re about to see some Uncharted 2. Sweet!

The sense of scale as Nate clambers over rooftops and, holy crap, runs away from a helicopter dishing out machine gun fire, is just sick. Nate ducks through a hole in the wall to find enemies waiting to take their own shots at him. He runs,guns, takes cover and jumps as the helicopter literally shoots the building out from under him.

11:26 – First public unveiling of live MAG gunplay comes next. MAG is an FPS that pits 256 players against each other on the field of battle. We’re about to see a real live game in progress. Pulling back, you can see that the battlefield is just massive. The squad leader calls in a UAV to try to get a bead on the enemy’s location, but it gets shot down. Gameplay-wise, MAG looks like your typical squad-based shooter, just on an insanely massive scale. Could be amazing, if it runs smoothly enough.(Which this demo is doing, by the way.)

11:32 – Let’s talk PSP now. As an aside, I can see the sound guy’s teleprompter that lets him know what’s coming up. I can see the future!

11:35 – He’s here to officially announce the PSP redesign. For those who have a more “digital” lifestyle. Kaz says “We have a couple of names for this device. First, we call it the Worst Kept Secret of E3.” Har, har.And, of course, it’s also called the PSP Go.

11:37 – More than 50% smaller and 40% lighter than the original PSP. 16G of internal flash memory, built in WiFi, Integrated Bluetooth…but you knew all of that already.

Media Go will be the new application for accessing the PlayStation Store on the PC. Sense Me will be a new PSP application that will select a musical playlist based on moods that you select.

Lowering the price of the PSP toolkit to encourage new devs to create PSP content.

11:42 – Polyphony’s Kazunouri Yamauchi comes out to announce Gran Turismo for PSP, “which everyone has been waiting for for so long.” Has Gran Turismo running at 60 fps on the PSP Go.

It offers a full-size Gran Turismo experience. This is not some “shrunken down” version. And now we get to see a video of it in action. Preeeetty. Have to check it out on the show floor to see if it really is that luscious.

11:50 – Time for Sony’s Metal Gear announcement. Hideo Kojima comes out to talk Snake. Too bad he couldn’t have a cameo at Nintendo’s press conference, just so he could have the trifecta.

Sigh…thanks to yet another technical glitch, I just lost everything about about the game. Ok, it’s not a spinoff, Kojima will write the script and produce the game. Game takes place in 1974, in Costa Rica. We saw a trailer, which looked to have everything a Metal Gear lover might want.

But now we’re on to Resident Evil Portable.

12:00 – Which pretty much just gets namechecked along with LittleBigPlanet, Jak and Daxter, Monster Hunter, and a bunch of other PSP games for which we are seeing a trailer now.

Video to show us how far Home has come in the six months since it launched. Apparently the ability to make your avatar do the fingergun thing is a major selling point. Yeaaaah,sorry, guys, I still just don’t care.

An all-too brief glimpse at God of War 3, and now Jack is back. By the way, why was LittleBigPlanet in that montage?

12:14 – Rockstar North will be bringing Agent exclusively to the PS3. Aaaand…that’s all they’re saying about that. Wow, really? Yeah, really. We’re going to look at Assassin’s Creed 2 now.

12:15 – AC2 picks up right where AC left off, and is set during the Italian rennaissance. Which I’m sure I just misspelled. The story centers around someone who isn’t an assassin at first, but becomes one with the help of friends like Leonardo DaVinci. In the demo, our assassin is taking advantage of a flying machine (glider) designed by DaVinci. Very vibrant looking world.

Over 30 different weapons, along with 6 more that you can unlock by playing the PSP Assassin’s Creed.

12:35 – Now we’re watching a demo of a new controller that works with the PlayStation Eye. It’s one-to-one movement, just like Nintendo’s Wii Motion Plus – which the engineers doing the demo slyly reference by turning the controller into a virtual tennis racquet. Also using it to write precisely with a virtual pencil, doing a bit of artwork with a spray paint can. We’re just looking at prototypes right now, unfortunately.

The demo guys point out that this controller would give you such precision that you could finally play a proper RTS on a console. Good point.

You can create your own little racer (lawd, they’re so cute), and your own karts. Oh, did I mention it’s a kart racing game? Pick up powerups, hit launch pads, dodge Thwomps…erm…Devastators. Oooooo, even better, just make a track of your own. To lay down track…just drive! In seconds, you can actually make a brand new, totally functional track. Ok, that’s pretty damn swank.

1:00 – Video of The Last Guardian, which is Ico meets The Neverending Story, and utterly beautiful.

Sounds like we’re going to get to see some God of War 3!