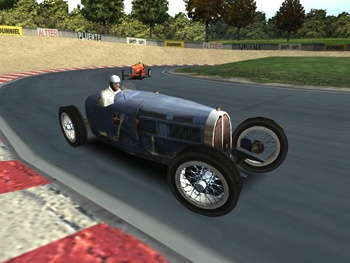 The reason the race car level in Mafia wound up being incredibly aggravating is so simple, you may not actually believe it.

“It was brutal,” says Mafia II Senior Producer Denby Grace, of the iconic open-world mobster game’s infamous car racing level – a level so hard most players couldn’t get past it and gave up. He says it was one of the few criticisms he gave 2K Czech (formerly Illusion Softworks) when he joined the team to create Mafia II.

Talk to anybody who played Mafia, and if they agree on nothing else, they’ll all agree that damn level can die in a flaming car hurled off a cliff. It wasn’t so much that the race itself was hard, but that controlling the race car – the fastest and most difficult to handle vehicle in the game – was next to impossible.

The game was set in a fictional “New York-style” U.S. city in the 1920s-30s era and featured dozens of period-specific cars. As the game progressed, players gained access to newer and better cars, with varying top speeds and handling characteristics, but the “Race Car Level,” as it is not-so-affectionately known, threw players directly into the seat of a single-seat, open-top roadster for a “do or die” race mission. Come in first and you complete the level. Come in any position other than first and you have to play the mission over until you get it right.

Grace describes a meeting with the writer and director of Mafia, Daniel Vavra, who asked him what he thought of the game. “Maybe after a few more beers,” said Grace.

He says he eventually admitted that he liked the game as a whole, but hated that damn race car level.

According to Grace, Vavra simply nodded his head and said “I know.”

As for why that mother-loving level was so hard, Denby says he took a tour of the studio in Brno, Czech Republic and finally discovered the answer: The designers responsible for many of Mafia‘s original levels – including “The Race Car Level” – were all sitting at computers with racing wheels.

“Those guys were making a race car game,” he says, adding that the difficulty curve is an aspect of the original game they’ve heavily adjusted for the sequel.

Be sure to check out our hands-on preview of Mafia II.