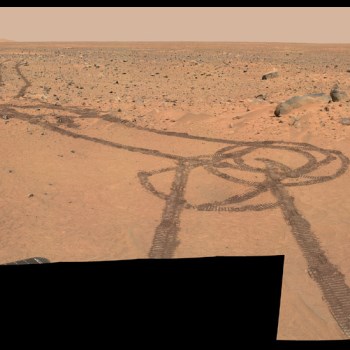 The Mars Rover “Spirit” may be gone, but it left us something special to remember it by: a drawing of a giant penis on the surface of the red planet.

It is perhaps the most impressive bit of peen graffiti ever created, and yet it wasn’t created by human hands. It’s not even here on Earth, in fact, but on Mars, thanks to the efforts of the Mars Rover “Spirit,” which did a little spinning and burning in appropriate places to leave its mark on the surface of the planet – and by “leave its mark,” I mean “drew a picture of a giant wang.” It’s legit, too; the image appeared on the Mars Exploration Rovers page of NASA’s Jet Propulsion Laboratory website.

And so it sat, harmlessly, until a sharp-eyed reader spied the thing and uploaded it to Reddit with the caption, “Mars Rover = $800m, Team to operate = $1bn. Drawing a penis on the surface of another planet = priceless.” The sudden surge of viewers that followed was enough to crash the JPL site for awhile, but NASA was cool about it and even demonstrated a sense of humor by uploading a higher resolution version of the image after the site was back online.

Alas, the giant space schlong was not the result of a rogue AI or a NASA engineer with too much time on his hands. “The truth is much more prosaic. The phallic shape naturally resulted when the six-wheeled Spirit, which was declared dead in 2010, made a turn,” Space.com explained. “NASA’s currently active Mars rovers – Spirit’s twin Opportunity and the much larger Curiosity – have also made similar tracks on the Red Planet.”

That’s a little disappointing, but on the bright side it means there are actually multiple giant wangs scrawled across the surface of Mars, surely a fitting tribute to humanity’s ingenuity. It opens the door to some potentially great new slogans, too. “NASA: We take pics, we leave dicks.”

Yeah, I’d be cool with my tax dollars funding that.